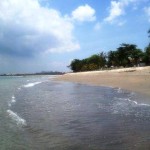 The beach in Bali (Dan Zokaites) 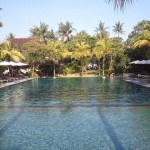 IMG senior guide Dan Zokaites reports that he made it to Bali, Indonesia with all his luggage, and he sent a few photos to remind us that it is always summer somewhere in the world. Dan says that “it is hot and sunny, the ocean is actually warm enough to swim in, and massages are $6 an hour”. He has an extra day now to relax, before meeting the team and starting the gear prep. Good job, Dan…keep us posted and don’t forget your sunscreen! 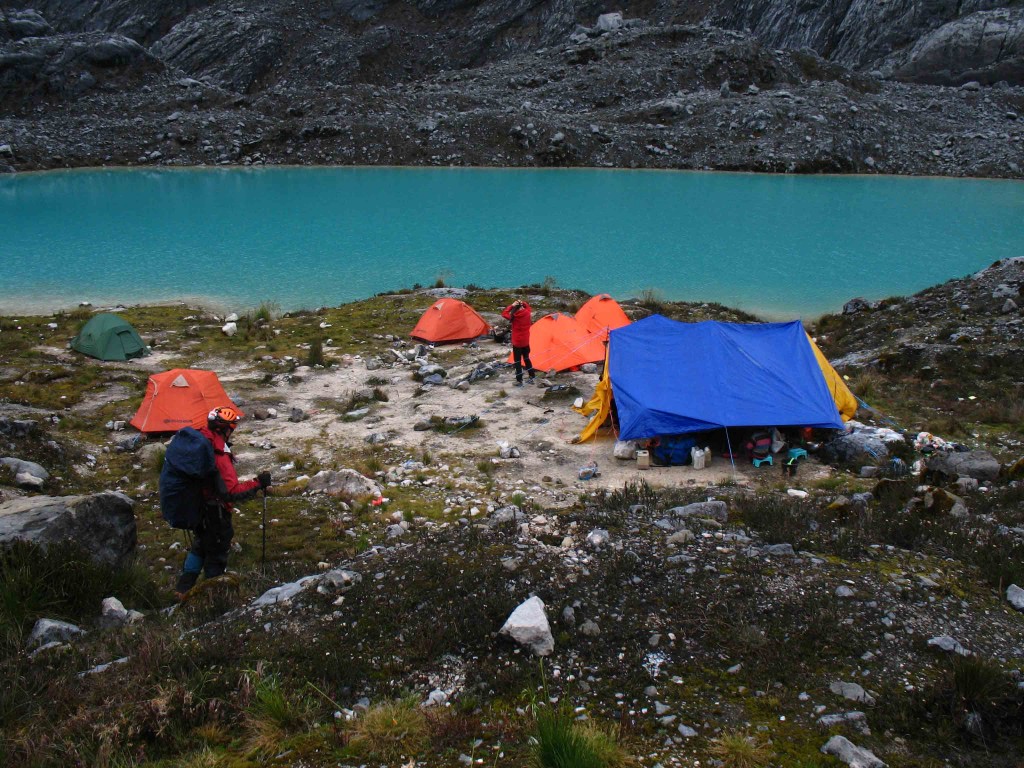 IMG guide Dan Zokaites reports that the team has all reached Carstensz Base Camp successfully via helicopter from Timika (no small feat from a logistics standpoint). It is a big jump in altitude doing it this way (Timika is basically sea-level and BC is 13,200 ft) so the first couple days will be easy ones as the team gets acclimatized. Their pilot is scheduled to return on the 18th, so they have over a week now for mountaineering. In addition to climbing Carstensz, they are also hoping to climb some of the other peaks in the area such as Ngga Pulu, Semantiri, and Carstensz East. We’ll look forward to following their progress! 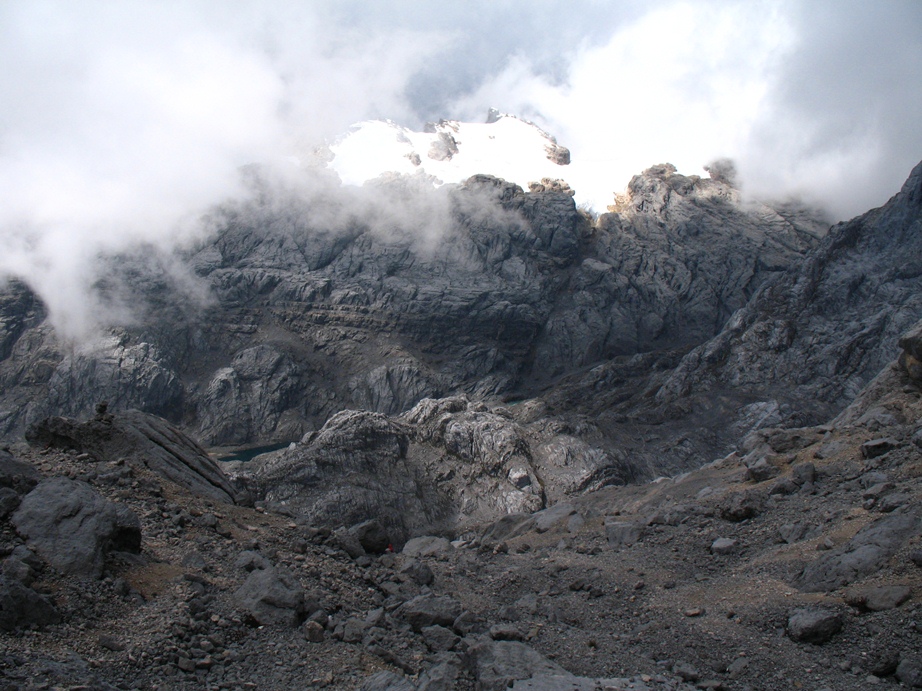 Looking up at Sumantri from near Carstensz Base Camp (Jason Edwards)

IMG guide Dan Zokaites called in on the sat phone to report that they had reached the summit of Sumantri, one of the other main peaks in the Carstensz area. Sumantri (4870 m;15,978 ft) is north of Carstensz Pyramid on the other side of the valley, and it is home to one of the only (and fast receding) glaciers in south Asia. Dan reports they did some rock scrambling, then used crampons on the glaciated portion, then climbed class 4 rock to the summit. Good job you guys, I bet there have not been many people to summit this peak! 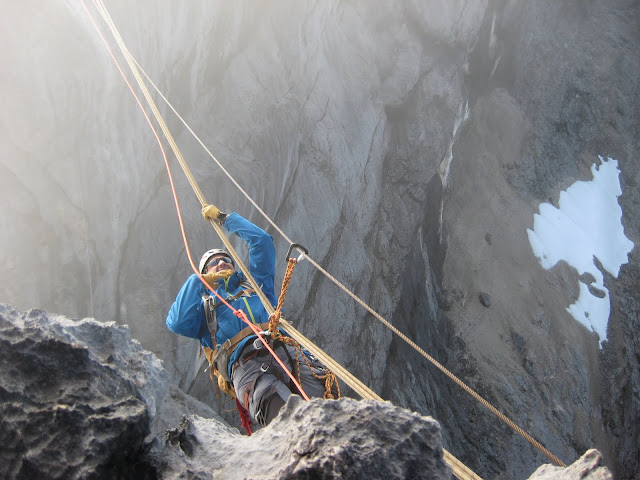 IMG guide Dan Zokaites called on the sat phone to report that the team reached the summit of Carstensz Pyramid today. He said they had some rain along the way, and that recent snowfall had made the upper pitches a bit more complicated. Nonetheless, they made good time on the route and were up and down in about 12 hours.

Say Goodbye To The Glaciers 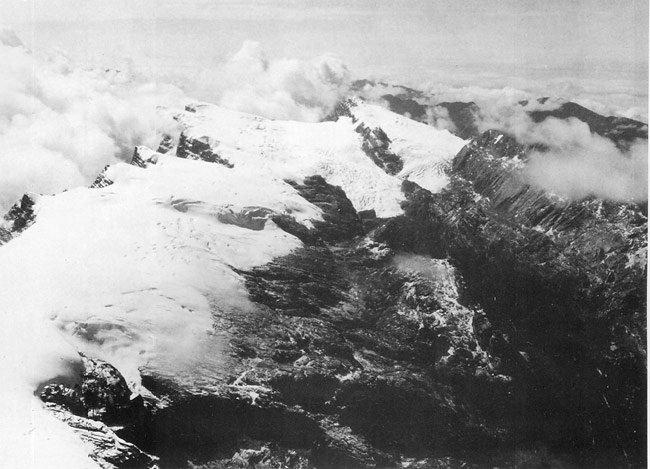 This 1936 USGS photo shows (L-R) Semantri, Ngga Pulu, and Carstensz East (Carstensz Pyramid is to the right, out of the picture).

IMG guide Dan Zokaites reports that the West Papua team’s plan for tomorrow is to head up to climb Ngga Pulu or maybe Carstensz East, depending on how the route looks. The team needed crampons for their climb of Semantri, but for Ngga Pulu it is mostly a rock climb now, with just a small amount of glacier left on it.

If you want to climb Glaciers in Oceania, you better get moving! 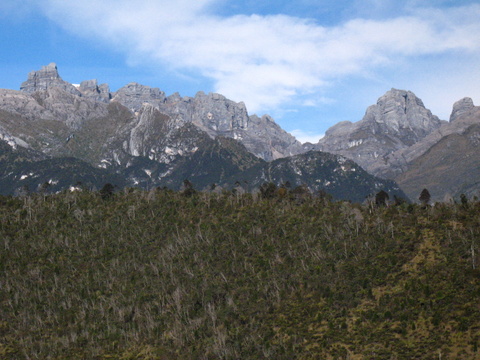 The view of the Sudirman Range from the north, on the trek approach to Mt Carstensz. Semantri is on the left (Jason Edwards)

IMG guide Dan Zokaites called today to report that his team successfully climbed Ngga Pulu (Puncak Jaya). The weather was excellent when they started, and it lasted until they reached the summit, but deteriorated into the normal (wet!) conditions as they descended.

In 1936 when the Dutch first climbed in this area, Ngga Pulu was estimated to be higher than Semantri. Now, however, the rocky summit of Semantri is a little higher (maybe 10m) due to the melting of the glaciers. Dan mentioned that they climbed both the snow and rock summits of Ngga Pulu today, and that the snow peak is still a little higher, but will eventually melt to be lower than the rock summit. Great job you guys, that is quite an adventure! 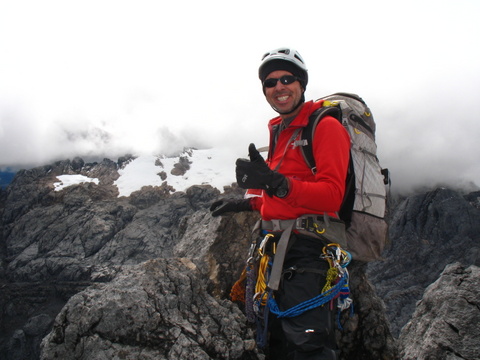 IMG guide Dan Zokaites reports that the team climbed the fourth and final main peak of the Puncak Jaya massif today, with an ascent of rarely climbed Carstensz East. We know the Dutch climbed it in 1936, but it was mostly covered by glacier ice then. Since then it has seen a handful of ascents. Dan said the limestone rock was quite loose in places, exposed by melting ice, and that they had to carefully make their way up and down the ridge. Unlike the other peaks they climbed, there were no cairns or signs of previous ascents. 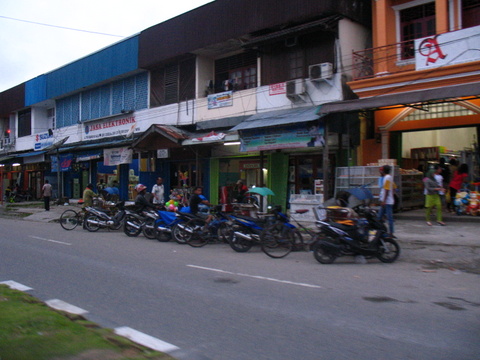 Dan Zokaites reports: “We made it to Timika this morning. Perfect weather for the helicopter! We are now sitting around the pool while our gear dries in our rooms. BC and Timika are quite different and it is amazing to change locations in only 20 minutes”. 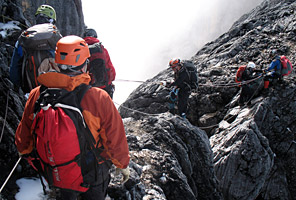 IMG was above and beyond my expectations. This has truly become the trip of a lifetime and a life-altering one as well... Thank you for all of your hard planning and making sure IMG's services surpassed our hopes.

~Ryan S.
In short, you run incredible expeditions to the degree that if all the 'clients' out there climb with you just once, all the other outfits will go out of business. And when people ask me how many people were on the trip, I don't say 3 guides and 9 clients, I say we had a team of 12. And that is very important. Thanks again for an outstanding two weeks...

~Gary G.
I pay for the expertise, but I hope for a complete experience — I got it all...I can safely say I won't climb with any outfit but IMG.