George Dunn began his climbing career in the Renton (WA) High School climbing club around 1969. He went on to attend the University of Washington in 1972 and carried on his new love for climbing throughout his time there. In search of a more interesting summer job, he tried out for a position as a summer guide on Mt. Rainier with Rainier Mountaineering in 1975. George fell in love with guiding and spent the next number of years trying to find a way to make it a full time occupation. At the time, summer guiding on Mt. Rainier was the only available option.

George and fellow guides Phil Ershler and Eric Simonson banded together to pursue guiding internationally and share in the expense of running a new business. This led to the formation of International Mountain Guides and became the nucleus of successful careers for the three of them, ultimately growing into one of the largest and most successful guide services in the U.S.

Major milestones along the way included International Mountain Guides gaining one of the first two additional concessions on Mt. Rainier in 2006 and bringing on fellow climber and snow safety expert Paul Baugher to the IMG team. The final big piece of the puzzle was gaining a Denali concession for IMG in 2019 after many years in the making and much hard work.

George's greatest achievement by far was marrying his wife Nancy in 1987 and raising two wonderful sons, Jimmy and Jeremy. He is eternally grateful for their support and understanding over the years, enabling him to balance a career in the mountains with family life back home. George clearly realized that a career as a guide was exciting, but his goal was always to bring everyone safely back home at the end of an adventure to what matters most in life.... family and friends. 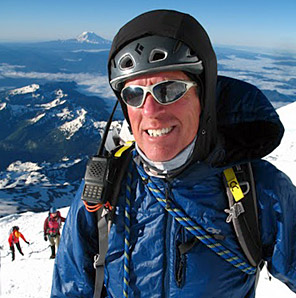 George is simply the best at what he does. Hands down. George's trips are well planned, he doesn't miss any details. George puts the safety of each person first and foremost. If you want to learn from the best, climb with George Dunn...