Wrangell/St. Elias is the largest National Park in the United States. It is greater in size than the entire country of Costa Rica. Of its 13.2 million acres, 5 million are permanently covered with snow and ice. This region has the largest concentration of mountain peaks over 14,500 feet in North America and very few visitors. It is definitely one of my favorite places to climb in the world. Come climb in this fabulous pristine wilderness before it gets "discovered."

Access is surprisingly easy from Anchorage. After a four hour drive from Anchorage we'll likely fly straight onto the mountain or if weather precludes a fly-on to the glacier, spend the second night at our bush pilot's remote lodge on the Chitina River. Either way, the next morning bright and early finds us on the glacier at the base of our climb. Most of our objectives are in the Wrangell mountain range. This is inland from the coast and has less precipitation than you might imagine. The temperature range is similar to Denali in June, varying from sunny, shirtsleeve days to storms with high winds of 40 mph or more and as cold as -20°F.

Our primary goal will be to make an ascent of one of the major peaks in the range (10,000+ to 16,500 feet). Working together as a small, mobile team, we will develop our own "Alaskan style" approach to climbing from a base at our landing site on the glacier. As we fine tune skills in preparation for our climb, we won't overlook opportunities to explore, train or ascend satellite peaks or ridges around camp. Our "Big Peak" will involve one or more additional camps above base camp. It will be a route that requires route-finding skill, exciting climbing and the chance to climb where few have been before.

The peaks of Wrangell - St. Elias Nation Park provide a perfect step up from glacier climbing in the lower 48 states, and are excellent preparation for Denali or other big expeditions. They remain the ultimate destination for those who want to escape crowded popular routes and experience mountains on their own terms.

Mt. Wrangell, one of the prominent peaks in Wrangell/St. Elias National Park, is a massive shield volcano. Its volume is over 220 cubic miles, which makes it more than twice the size of Mount Shasta, CA, the largest stratovolcano by volume in the Cascades.

In 2017, on an attempted expedition to nearby Mt. Sanford, our bush pilot wasn't able to land on the icy Sheep Glacier on Sanford and instead dropped the team in a broad saddle between Mt Wrangell and Mt Jarvis. Due to extended bad weather, the team was only able to climb Mt. Jarvis, a fun alpine peak rising 5,000 feet above the surrounding glacier. (See the

trip report from that 2017 expedition.) The team had hoped to climb Mt. Wrangell as well, and we'll return to accomplish this "twofer" with a camp situated mid-way between Mt. Wrangell and Mt. Jarvis. The distance between the two peaks is about ten miles, so a second (and third) camp will be situated partway towards each of the two peaks in turn, bringing the team to within striking range of each summit.

This program is the perfect "first big expedition" visit to Alaska. Although there is no technical climbing, we will travel over glaciated terrain throughout the trip establishing additional camps beyond our landing site. We will expect to experience Alaska weather, cold and altitude at its finest. Skis or snowshoes are both suitable for this program.

The group meets in Anchorage on day one. Our bush pilot will arrange for a pickup early the following morning and transport us the scenic five-hour drive to a remote airstrip near Chitina. From here we experience one of the most spectacular scenic flights imaginable into base camp at 8,500 feet on the Nebesna Glacier. The glacier-landing site is broad and flat and a perfect location for base camp. The team will establish two additional camps prior to the summit attempt. The route involves glacier travel throughout. The group will make one advance load carry to each camp in order to keep loads light and help with acclimatization. The team will practice rope travel, crevasse rescue and other expedition skills as necessary during the approach. The two summit days will be with light packs and will involve some spectacular views.

There are few areas in the world that can compare with the pristine beauty of Wrangell - St. Elias National Park, and our ascents will be climbs to remember for a lifetime. 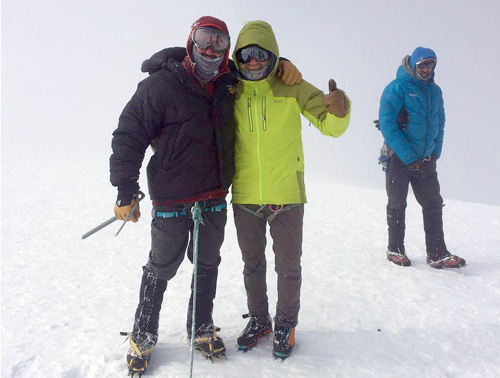 Mt. Sanford Climb Diverted to Mt. Jarvis
Story and photos by Scott Zannini
" I was again presented with one of the more unique climbing experiences you can have as a mountaineer — putting one foot in front of the other as the freezing wind and blowing snow desperately try to resist your progress..."

Mt. Bona Expedition with a Twist
Story and photos by Tom Allred
"Now we were dropped on the complete opposite side of the mountain on a route that as far as I can tell hadn't seen humans since Andrew McLean's 2007 attempt. There was nothing else to do but set up camp and see what the next day would bring..."

I had the pleasure of spending time in one of America's most pristine, magnificent and wild areas: the St. Elias range... This trip was one of the most delightful I've done because of the good leadership, companionship and incredible scenery... If you want a great adventure and a good time, this is a place to go, and do it with Geo!