Ama Dablam is a challenging climb. We do not use supplemental oxygen, the terrain is steep, and the camps are small and exposed (especially C2). Climbers must be able to rock climb at an advanced level. The standard route goes up the Southeast Ridge (the right skyline seen from the Khumbu Valley). It is a perfect climb, featuring great granite rock, ice, and just enough exposure. These alpine challenges make Ama Dablam one of the best alpine climbs in the world. 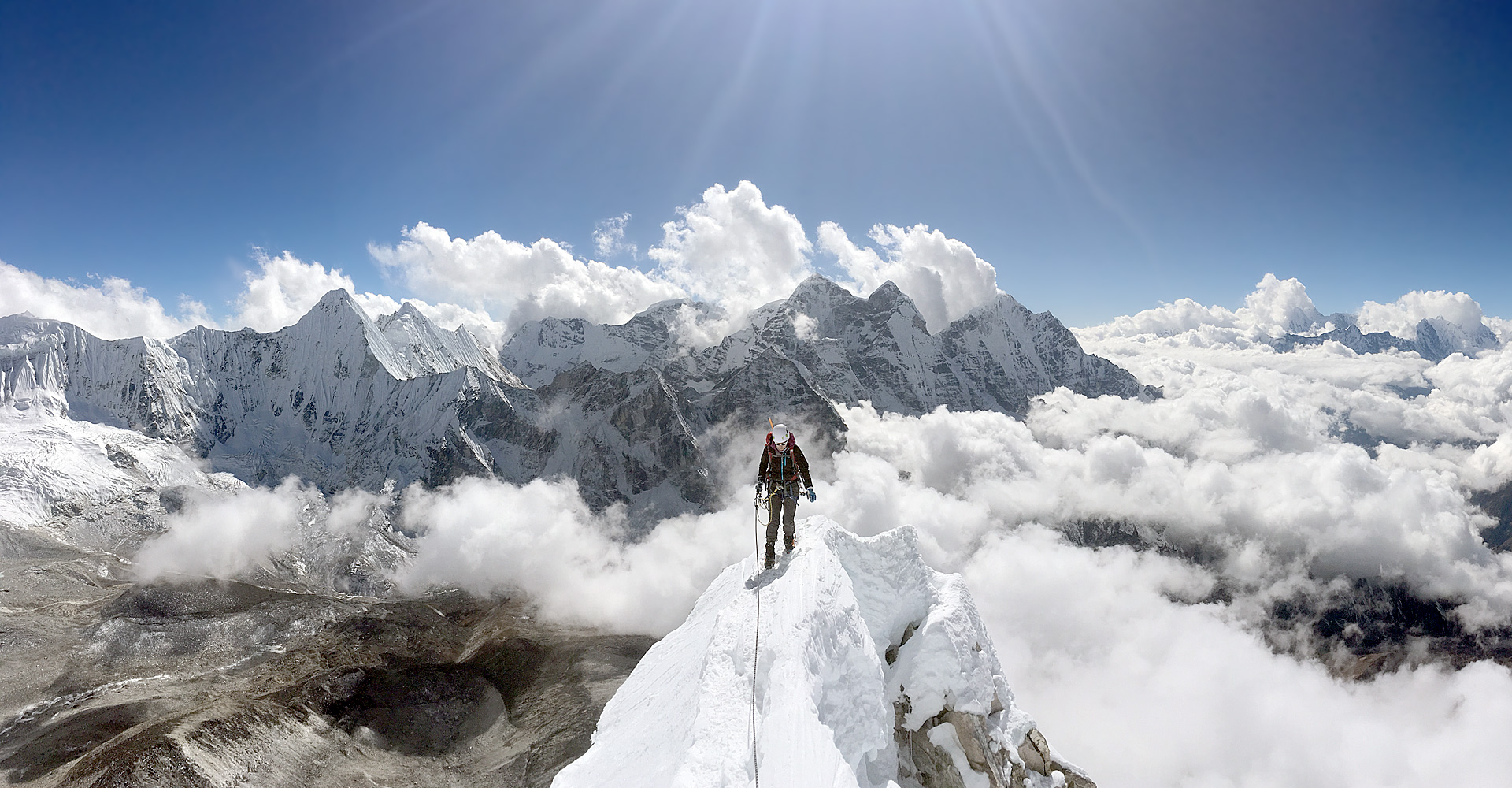 The trek to Base Camp is an experience to remember, starting with the famous flight to Lukla. From Lukla we made our way up through Namche, Tengboche, Pheriche and then up the Imja Valley to Chukkung village. From there we climbed the spectacular small nearby peak Chukkung Ri for acclimatization. After that, it was a straightforward high traverse partly around Ama Dablam to Base Camp and the beginning of the climb.

Ama Dablam Base Camp sits at roughly 15,000 feet and has grass growing, water flowing, and magnificent views up, down, and across the Khumbu Valley. For the team, it was a great place to call home for a few weeks. If you have ever been on an IMG expedition, you know we pay attention to the details, and this year was no exception. Our BC staff were phenomenal, and the guys were constantly cooking up delicious local food including some of our favorites from home. We were able to take a shower, surf the internet, and sip a hot cup of tea! 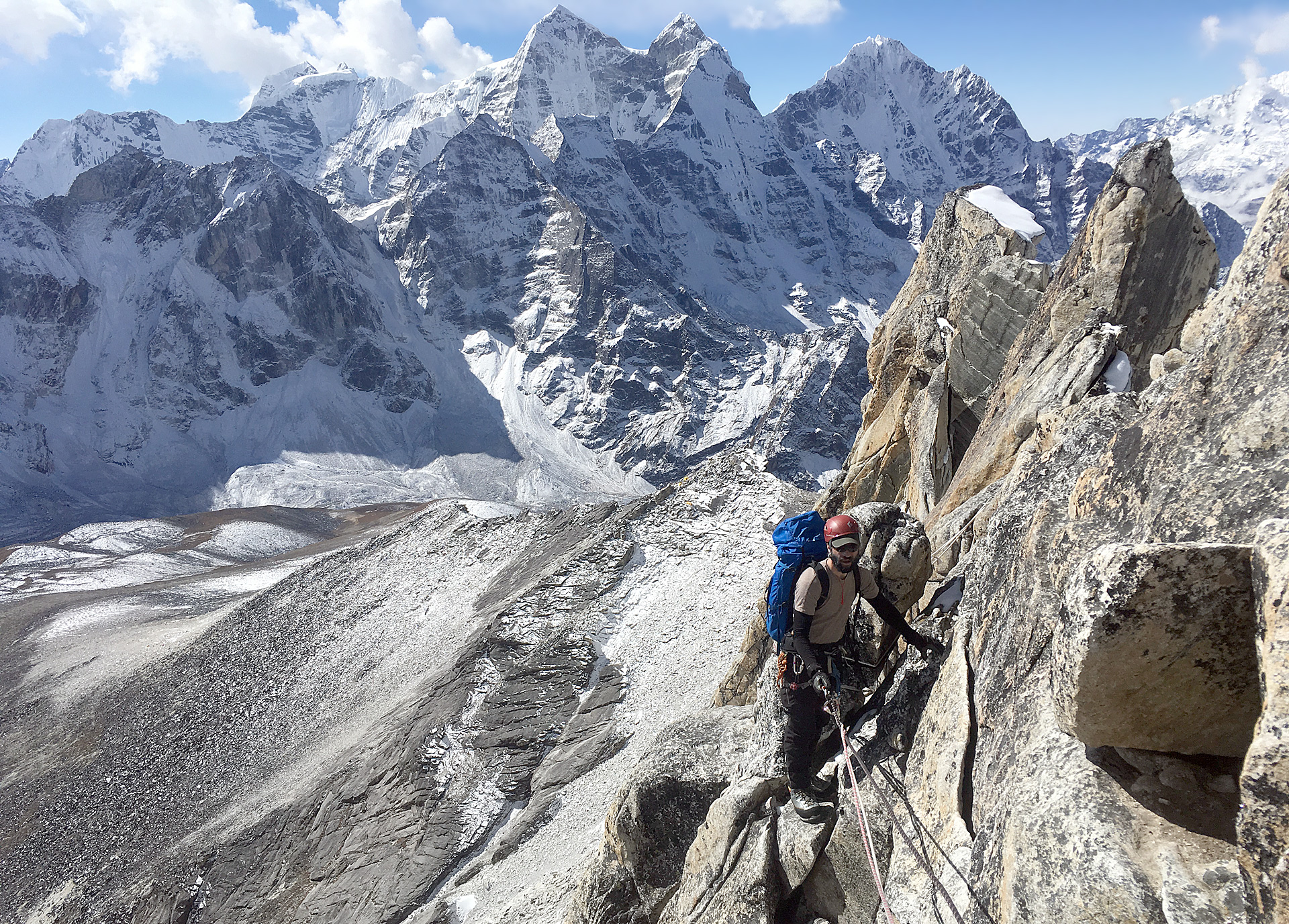 We arrived at Base Camp relatively well acclimatized from the trek in and the climb of Chukkung Ri. Nonetheless, we still needed an acclimatization rotation up to Camp 2 to prepare us for the summit attempt. Sleeping at Yak Camp and Camp 1 for a couple nights along the way was great acclimatization, and the climb up the ridge to Camp 2 was excellent practice. Camp 2 has to be one of the coolest camps in the world with just enough room for six tents. It has 360-degree views and sheer drop-offs all the way around. Needless to say, we stayed pretty close to the tents. 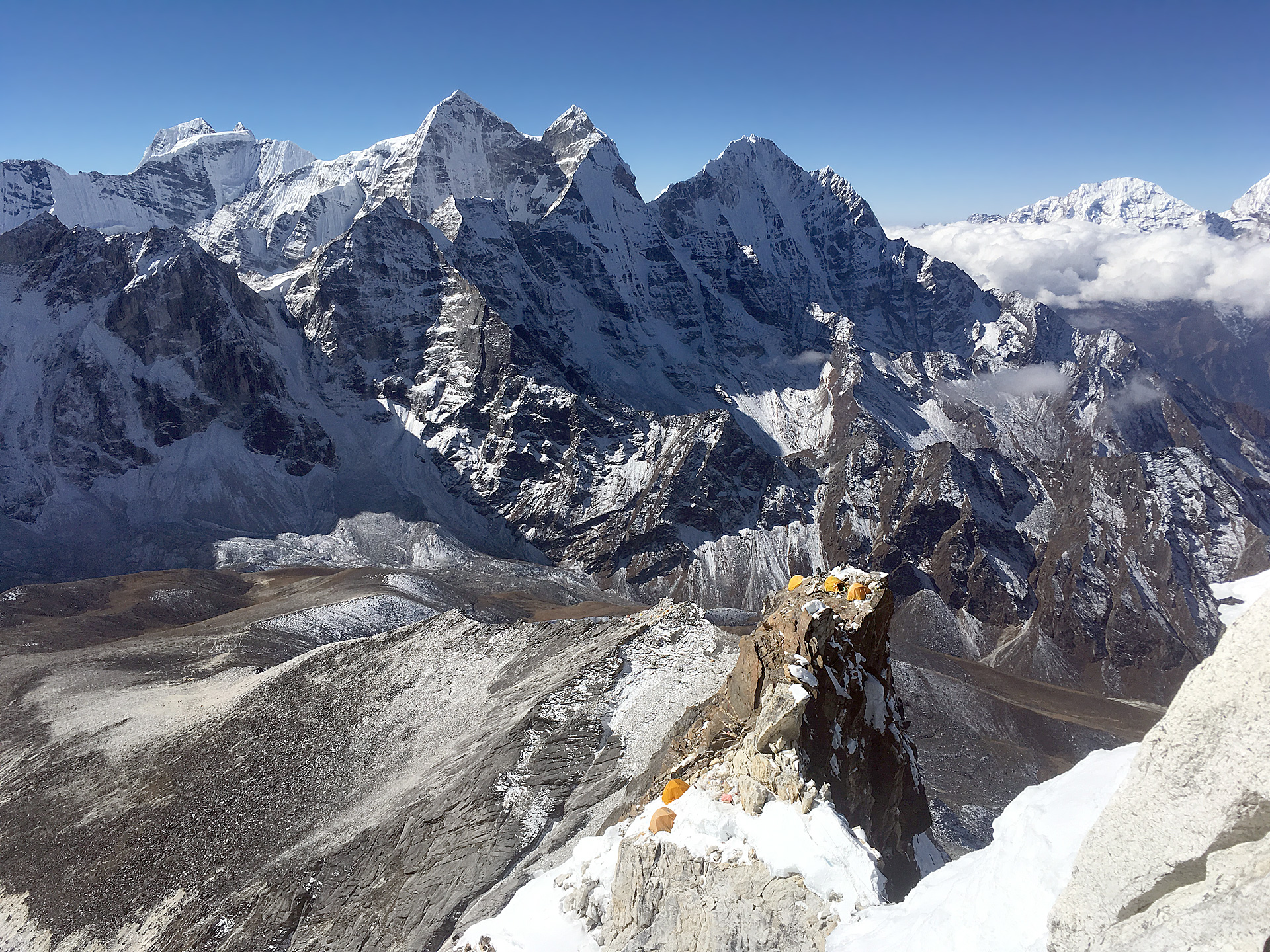 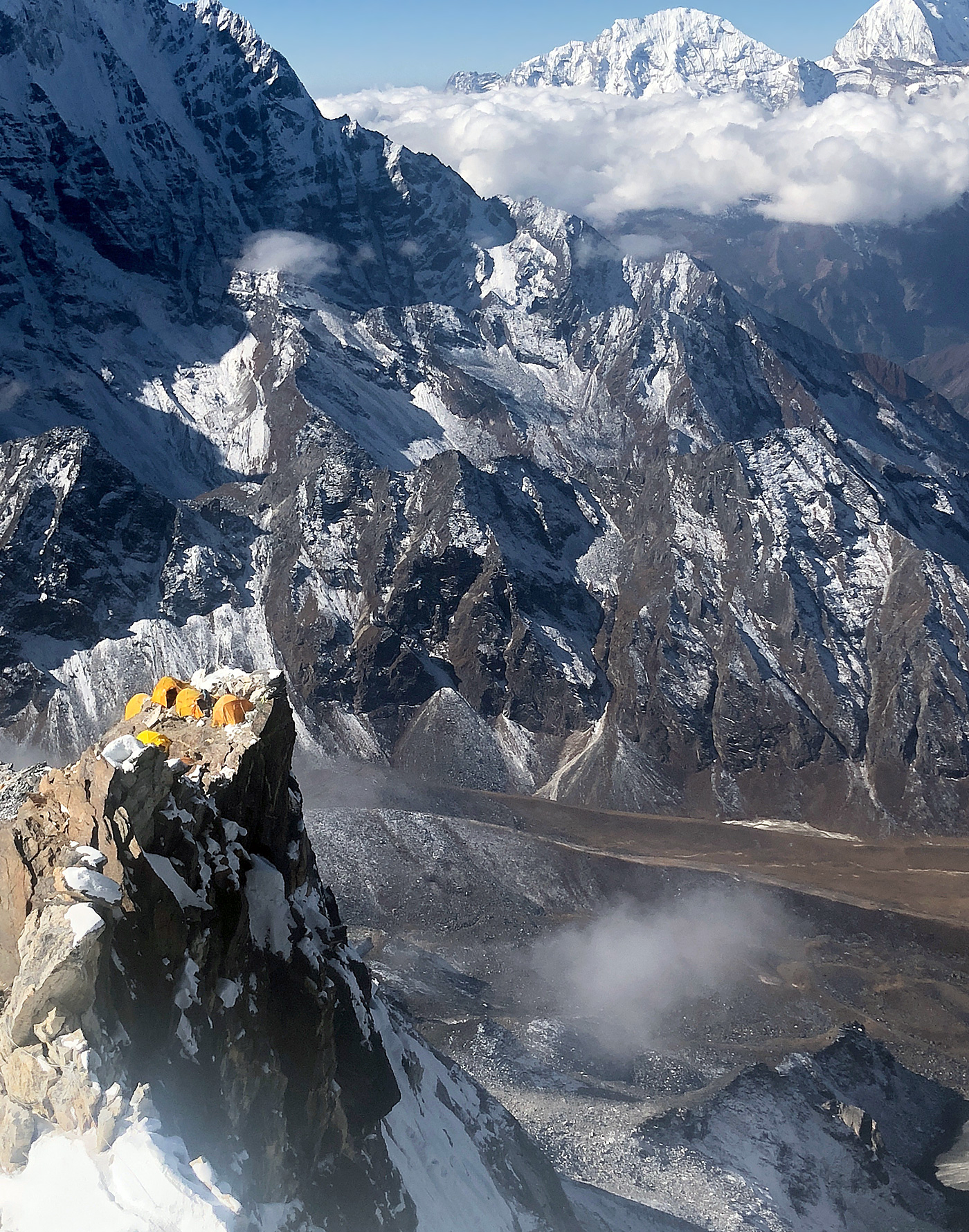 After some solid rest days and good food back at Base Camp, we were ready for our summit push. The first day we climbed past Yak Camp to Camp 1 for the night which put us on a schedule to avoid other parties while higher on Ama Dablam. Then, since the tents at Camp 2 are a pretty tight squeeze, we slept in a bit late at C1 to make our stay at C2 as short as possible! The climb to C2 went smoothly, and when we got there, the team was feeling good and had some great momentum. The next day we climbed the ice and cornices of the Mushroom Ridge to Camp 3. Expeditions over the past few years had deemed Camp 3 as uninhabitable due to ice fall hazard from above. I'm happy to report that is now a very viable Camp and recommended for any team. The ice fall has self-regulated and made for a perfect high camp.

The view from C3 on Ama Dablam (photo: Kevin Kayl)

The summit is palpable from Camp 3, and this year it only took us 3.5 hours to the top. Every step counts on Ama Dablam, and the opportunity to start climbing at Camp 3, instead of Camp 2.7 shortened the day. Our weeks of effort were rewarded by a cool and clear sunrise, followed by a spectacular Summit Day. 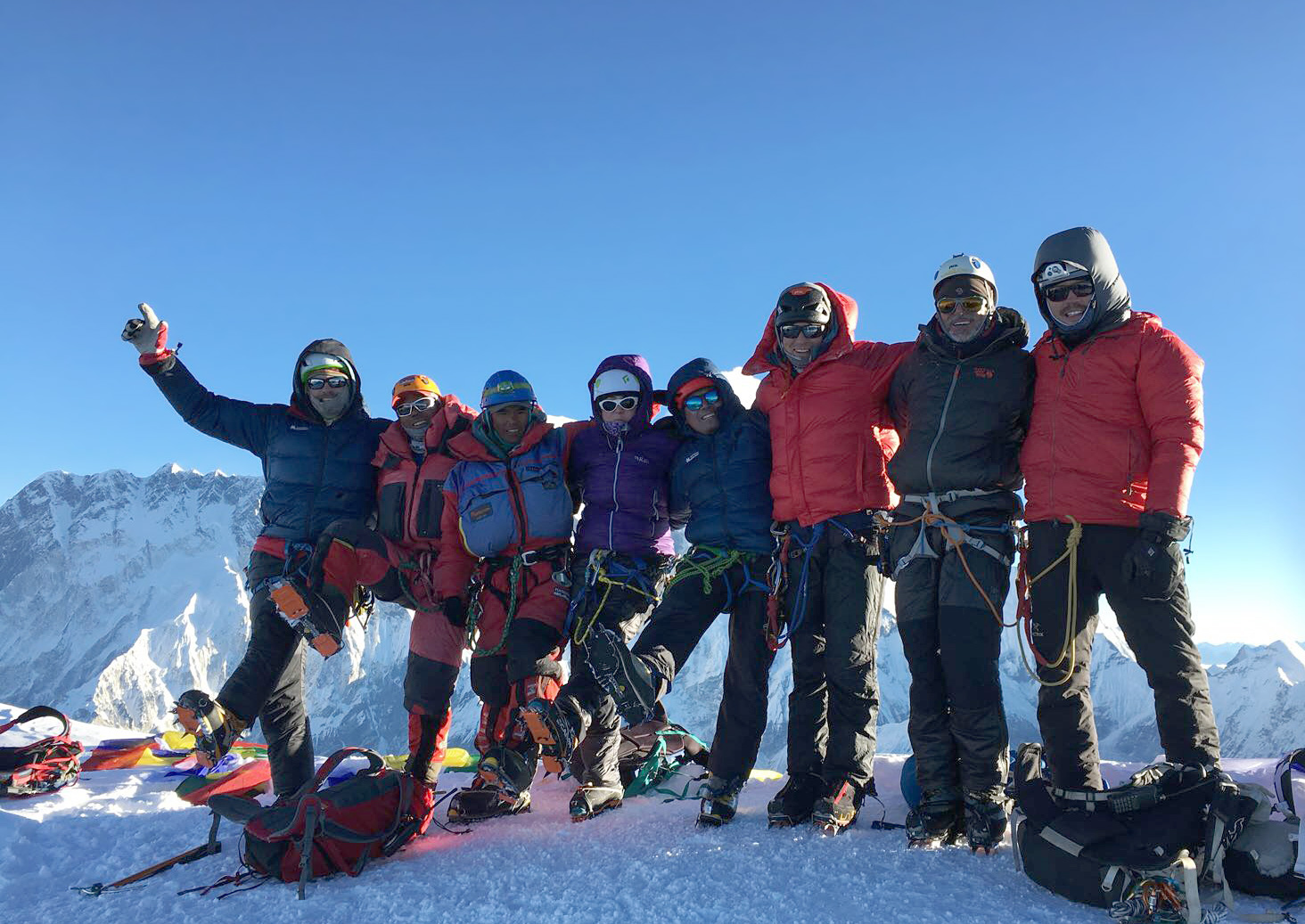 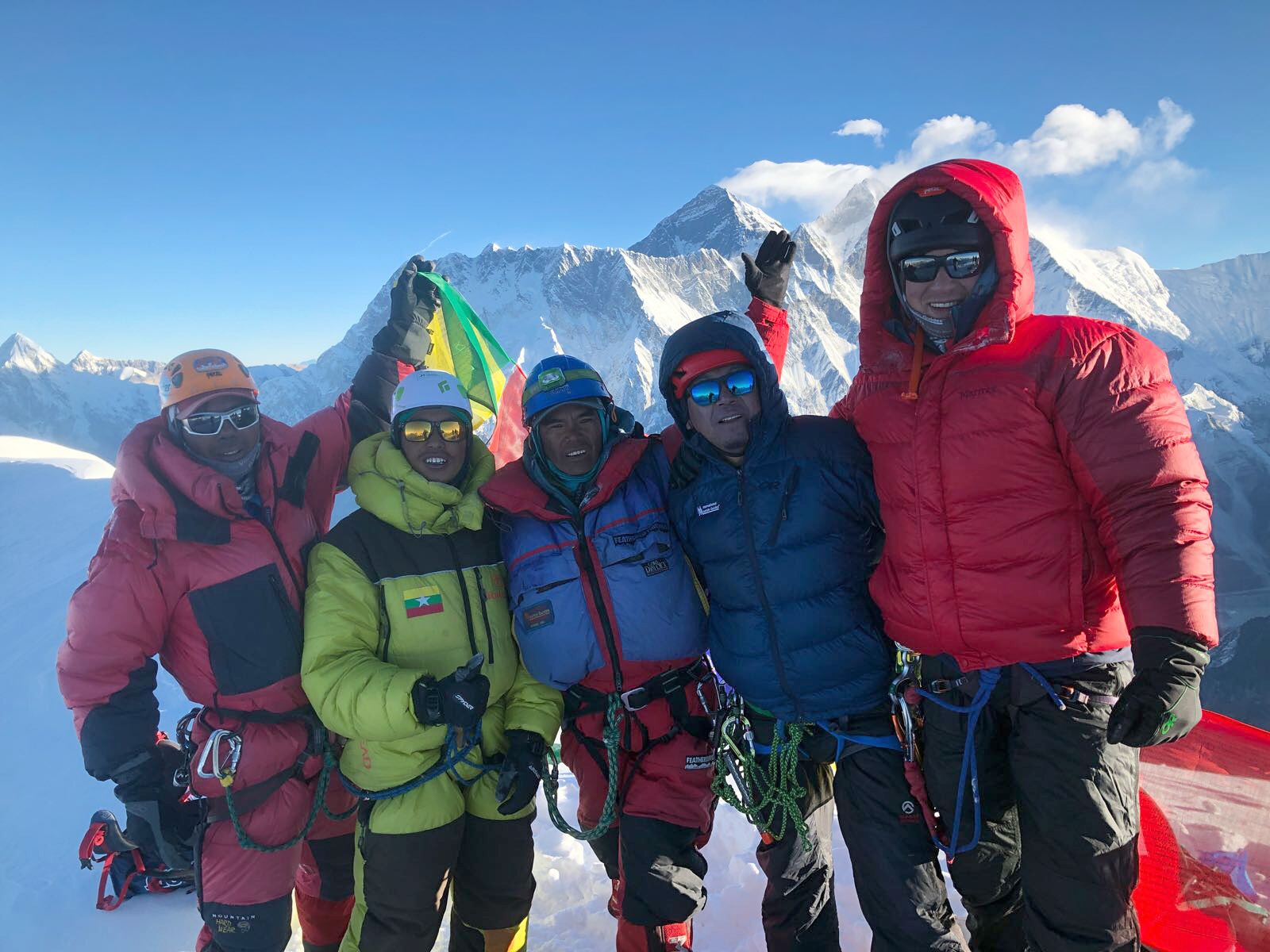 We descended to Camp 2 for the night and then to Base Camp the following day to celebrate our success. Well done Team! I'm happy to say that our climb was blessed with beautiful weather and great route conditions this year. 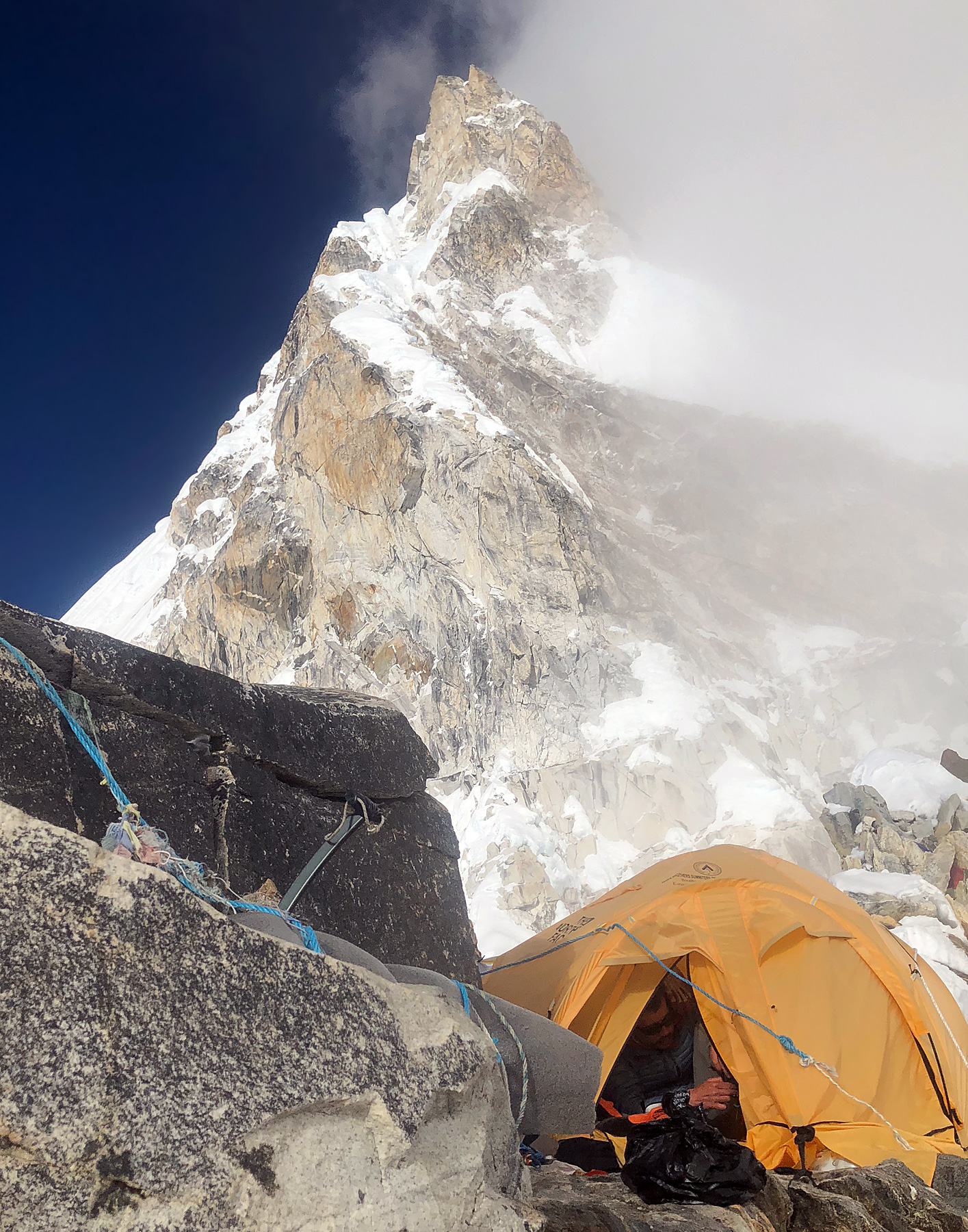 Looking up at the Yellow Tower on Ama Dablam (photo: Austin Shannon)

After the climb we naturally swapped stories and discussed what the hardest part of the climb was. There are several tough sections on the route, but the Yellow Tower (between C1 and C2) stood out to most of the team as arguably the crux of the climb. If climbing was easy, everybody would do it! Thank you to everyone back home that helped make this trip possible. 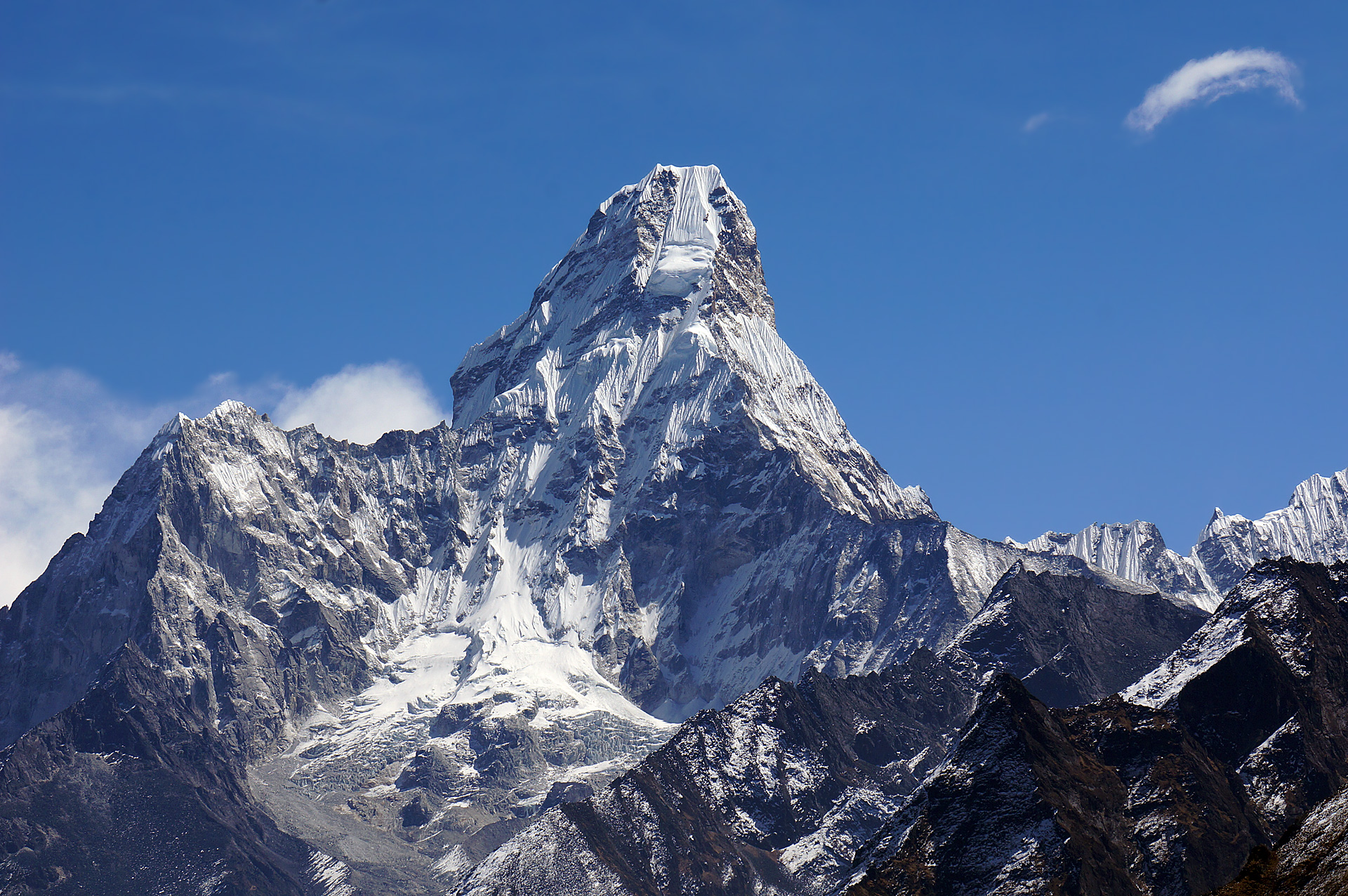 I was very impressed with your organization and had a terrific time on this trek and climb. Logistically, this trip was about as perfect as you can get. I would never hesitate to recommend IMG to anyone considering a guided climb.

I could go on and on, but the bottom line is that your organization is first-rate in every respect. Thanks for everything... I hope to make use of your services again...

I had a fantastic experience with IMG. I found you to be head and shoulders above your peers at other firms in terms of your flexibility, knowledge and professionalism. Furthermore, you employ some of the best guides on the mountains... After a lifetime of travel, this trip may have been the best travel experience I have had from a planning and logistics standpoint. I thank you and your team for making possible such a memorable and important trip for me.