I've been down to Torres del Paine National Park in Chilean Patagonia a few times now and while the IMG program doesn't change much from year to year, the groups sure do! This year was no different. We had it all - East coast, West coast, Louisiana, professors, teachers, auto body shop owners, pharmaceuticals, adventure racers, first timers, and a Seven Summiter  —  needless to say we were never short of stories to tell on the trail! My thanks to Julie, Noel, Eugenie, Terry, John, Sioux, Joe and Pramila for making this trek a wonderful experience.

Day 1  —  Travel day. I lucked out and ended up being on the same flight as a couple buddies of mine, IMG Guides Josh McDowell and Cedric Gamble, who were en route to Aconcagua. I also bumped into longtime friends of IMG, John and Sioux Dahlem, who were on their way to do a little trekking with me in Torres del Paine. We all watched a few movies and had a nice chat during our pit stop in Lima.

Day 2  —  I arrived in Punta Arenas on schedule at about 6:30pm. Bags in hand I was at the hotel a little after 7pm. I had checked my email in Santiago and had learned that half the team had been delayed and wouldn't land in Punta for a few hours. Those of us that did make it on schedule rolled with that curveball and headed out to La Luna for dinner. We were joined by the IMG Vinson Team, led by Greg Vernovage, who was set to fly to Antarctica the next day. Pretty cool to fly half way around the world and get to have dinner with Greg, another good friend of mine.

Day 3  —  Early wake-up call for me to greet the late arrivals. They pulled into the hotel around 6am (just 12 hours late) and were all smiles! No sleep for those guys; shower-up and straight to breakfast! After breakfast (and several cups of coffee) we got to know each other a bit with some team introductions then we hopped in the awaiting van and were off to the Penguin Rookery. It was a nice enough day with broken clouds, a slight breeze and a little mist in the air  —  not enough to get wet though. After about an hour we said our goodbyes to the penguins and pointed towards Puerto Natales for afternoon gear checks and our welcome dinner at Don Jorge.

Day 4  —  First day on the trail. A few hours in the van and we were at the trailhead and trekking by noon. It was raining hard enough to warrant the goretex but by 2pm the rain gave way to the sun for a few very important hours. After lunch at Refugio Chileno, our hut for the night, we continued up the trail to the towers, a signature part of the park. The clouds had been coming and going all day and reports from folks coming downhill were mixed on if the towers were out, or if they were shrouded in clouds. Not convinced either way we continued on…thankfully. We pulled into the small cirque around 4:30pm and couldn't have asked for better weather: nice clouds back-dropped by a vibrant blue sky. After about 45 minutes the weather turned and in came the snow/sleet/hail/rain/wind  —  back down to the hut for dinner.

Day 5  —  Silence Valley. 7:30 breakfast and on the trail by 8:30 for our day up into the Silence Valley. The Silence Valley is a special place, and Torres del Paine National Park is trying to keep it that way. They don't allow trekkers into the valley without a special permit. I've been in the valley a handful of times now and have only seen six other people, mostly climbers. Permit secured well in advance, up the trail we went, along the river and through the trees to Japanese Camp. From there it was up the creek bed and up onto the moraine into the Silence Valley. We trekked up into the valley until about 1pm where we stopped for lunch, took in the views and the silence. The valley is appropriately named. After lunch it was back down to the hut where we picked up the rest of our gear and continued on down to our camp for the night.

Day 6  —  New Year's Eve! It rained for the better part of the night but it had cleared up by the time we woke up for breakfast. All packed up and on the trail by 9am we were off to Refugio Los Cuernos, our home for the next couple nights. It was a perfect day  —  not too hot, not too cold. We took a few extended breaks just to enjoy the day. We pulled into Los Cuernos around 3pm. Some showered. Some cruised down to the lake to soak in the sun. A couple hopped into Lake Nordenskjold for a minute or two. Others had a beer and took a nap. There's no wrong answer on a nice afternoon at Los Cuernos. That evening the kitchen staff went out of their way for the big night  —  BBQ ribs, roasted chicken and some grilled lamb were the big ticket items on the buffet. The team rung in the New Year…asleep, but giving credit where credit is due, they did get up at 2:30am to search the skies for the Southern Cross. Luckily we brought Joe along, a physics professor and an astronomy buff. Southern Cross  —  check. Back to bed.

Day 7  —  Coffee please. After some coffee we loaded up the day packs and made our way up into the Bader Valley, another special permit section of the park. The first day of 2015 was a good one. We cruised uphill to a nice little lunch spot. That was good enough for today. Back down to the refugio for the afternoon. Tomorrow is a big day.

Day 8  —  The French Valley. Another classic postcard moment in the park is the French Valley. It's just a couple hours from Los Cuernos to Italian Camp where we cached our packs. From Italian Camp we split the group, a few folks went with me up to the view point while the rest of the team went with Tadeo down to the waterfall to check out the glacier. Everybody wins. Our timing was perfect  —  we met up back at our packs a couple hours later, crossed the river and were on our way to Paine Grande for a pisco sour and a good night's sleep.

Day 9  —  Woke up to a little rain today but nothing to shake a stick at. We loaded up the packs for the 4 hour trek to Refugio Grey. Nice views of the icebergs in Lago Grey along the way. By the time we got to the hut the rain had subsided and the sun had begun to creep out. We took the afternoon to ourselves and got settled into the hut, our home for two nights. After settling in, we took full advantage of the afternoon sun and the calm waters on the lake by taking a 3 hour kayak tour. The tour took us right past icebergs the size of houses and up to the face of the glacier itself. Breathtaking!

Day 10  —  Our last day on the trail (or so we thought) was spent walking up along the Grey Glacier.

Day 11  —  The schedule had us boarding the Grey II boat for a 3 hour return trip to the van…the weather had other plans. The 40-50mph winds prevented the Grey II from leaving the dock and forced us to head back down to Paine Grande to catch the afternoon catamaran on Lago Pehoe. No problem, we put the packs on after lunch and with the wind at our backs we headed back to Paine Grande. We pulled into the hut around 4pm, had a coke and hopped on the catamaran around 6:30pm. Our driver, Pato, was waiting for us on the other side of the lake. From there we were off to Puerto Natales for a late celebration dinner at Cormoran de las Rocas.

Day 12  —  Breakfast at 7am was our last official team meeting. We sipped some coffee and shared some of our favorite moments from the past week on the trail. Some folks were sticking around for a bit so we said some goodbyes, grabbed a couple souvenirs and hopped on the van for the trip back to the Punta Arenas Airport and our afternoon flights home.

Day 13  —  Home, always a nice feeling! The smelly gear in the duffel bags can wait until tomorrow. 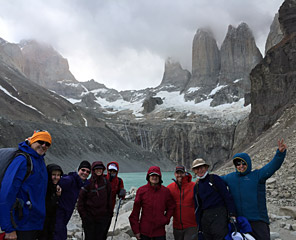 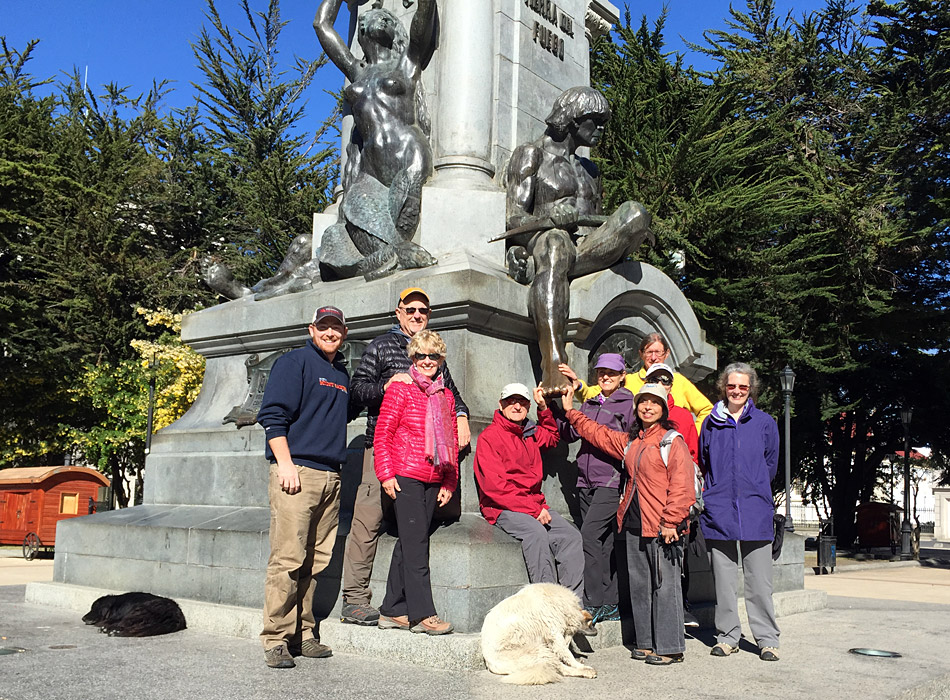 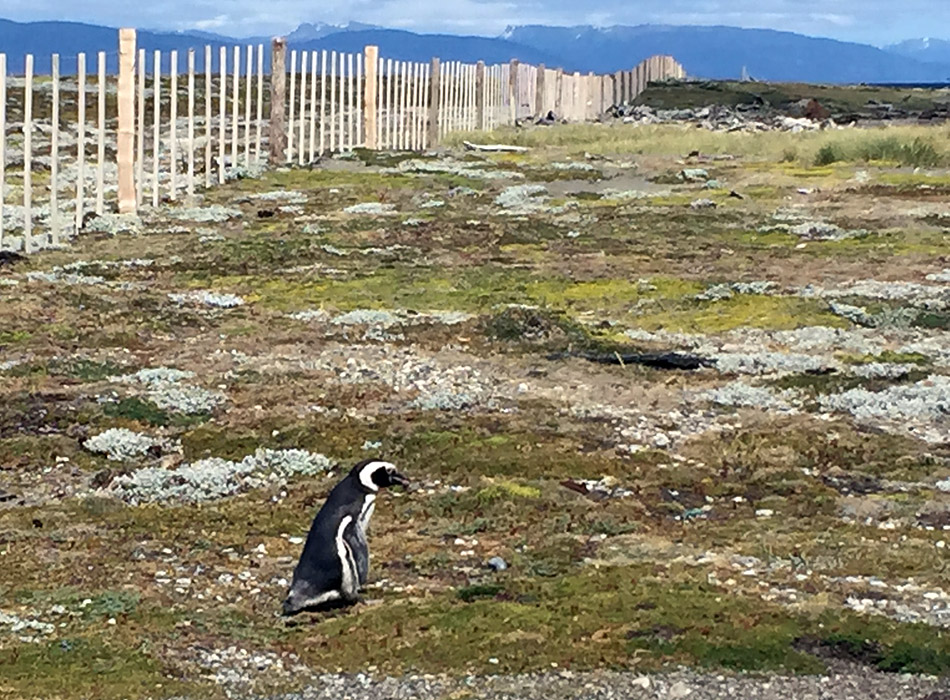 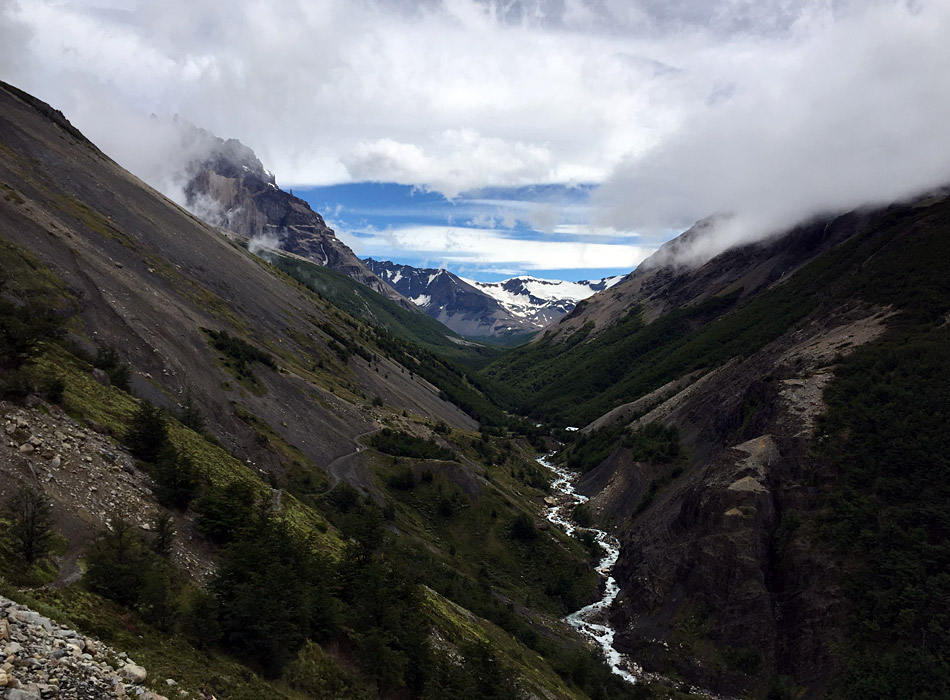 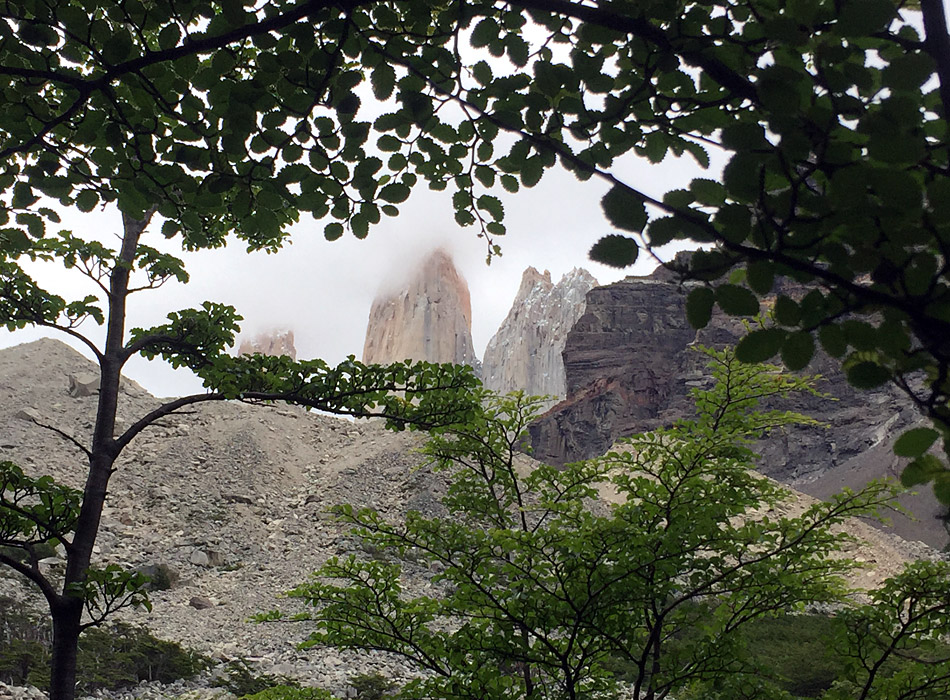 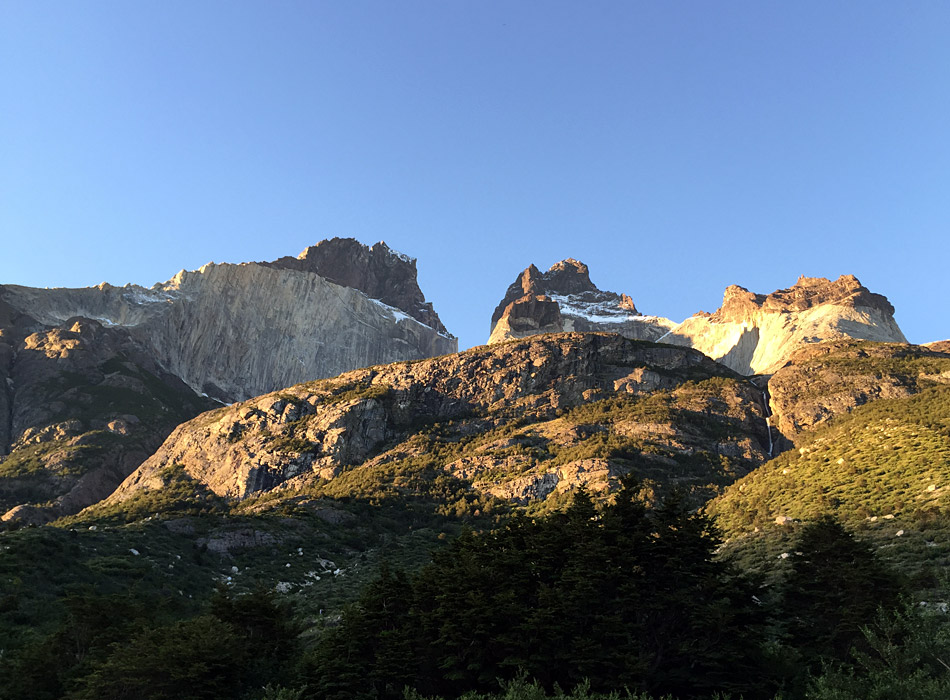 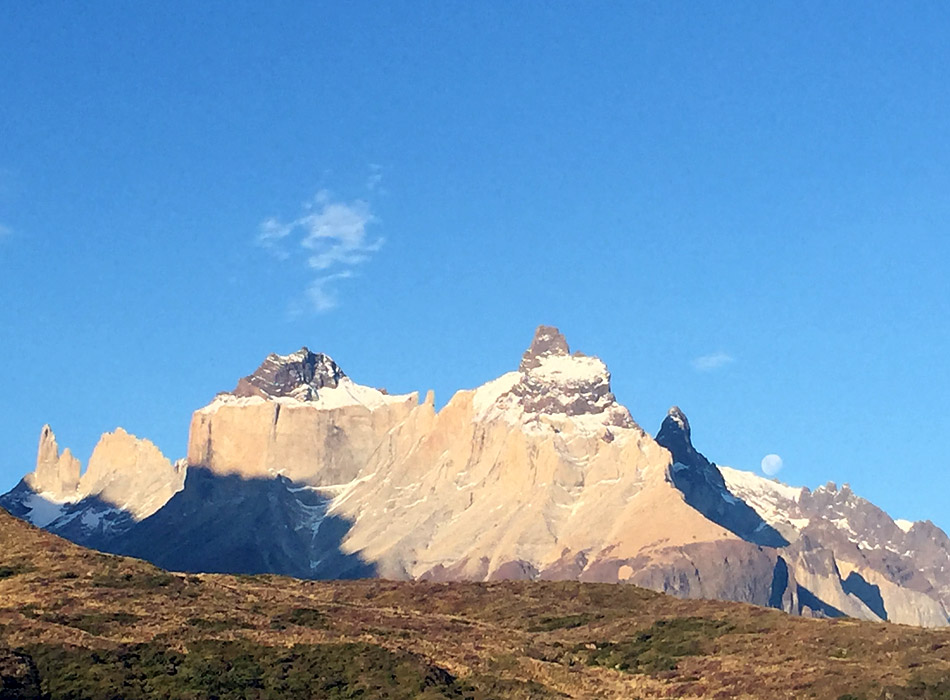 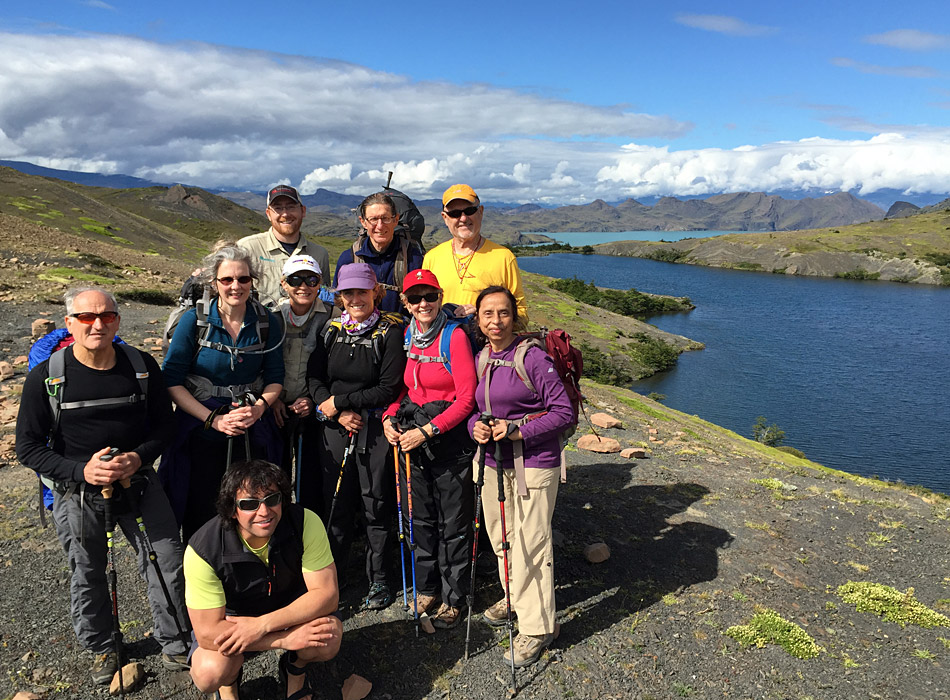 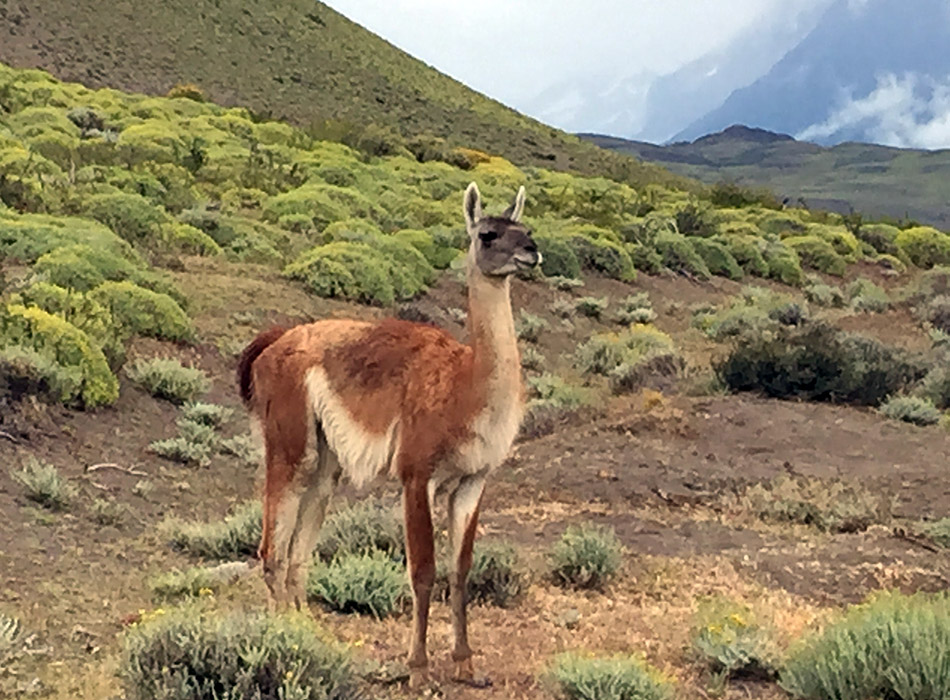 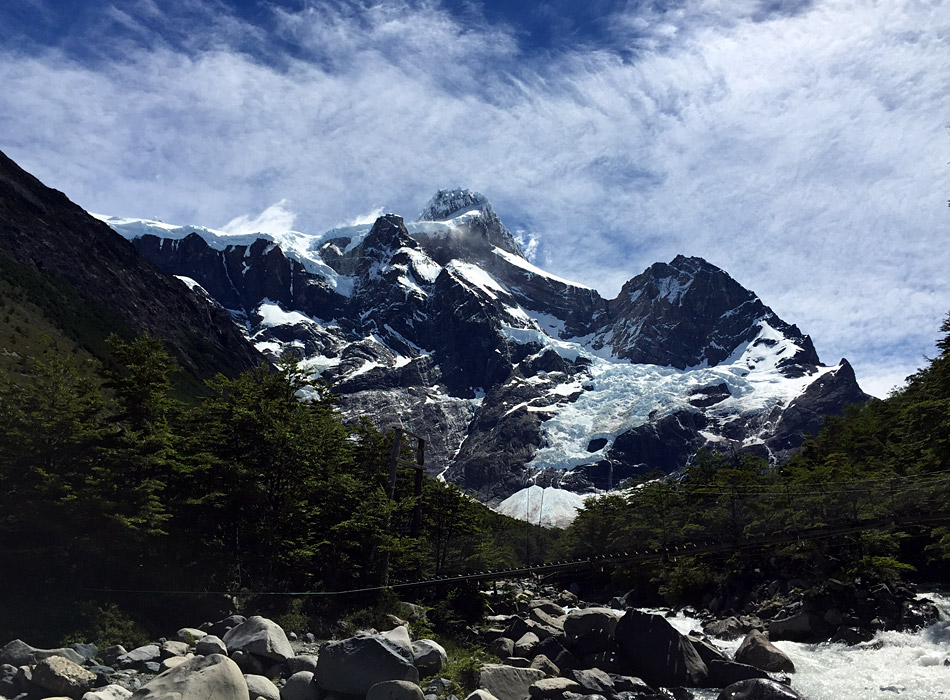 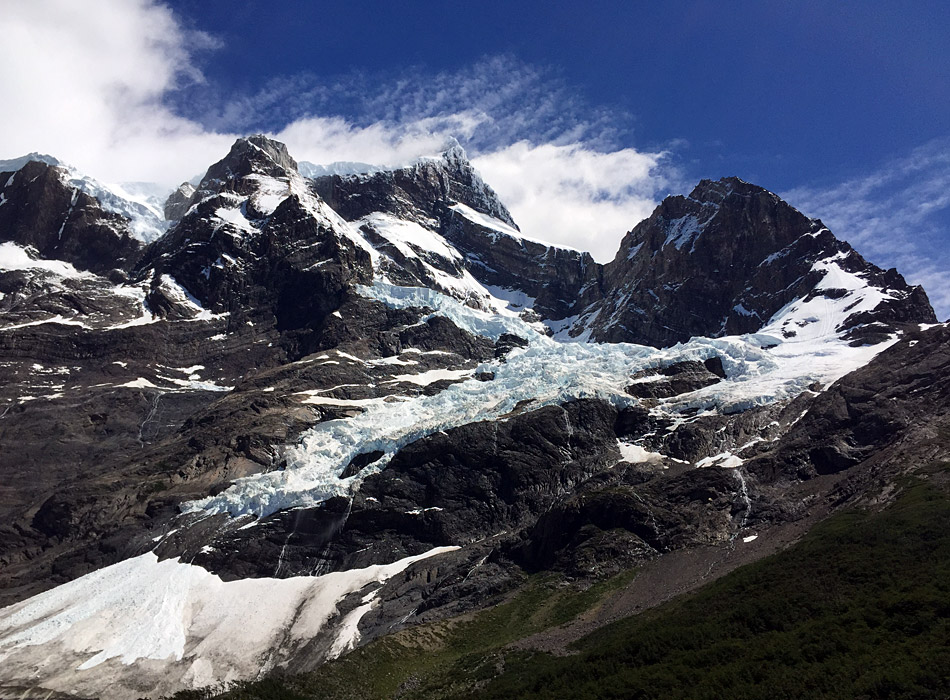 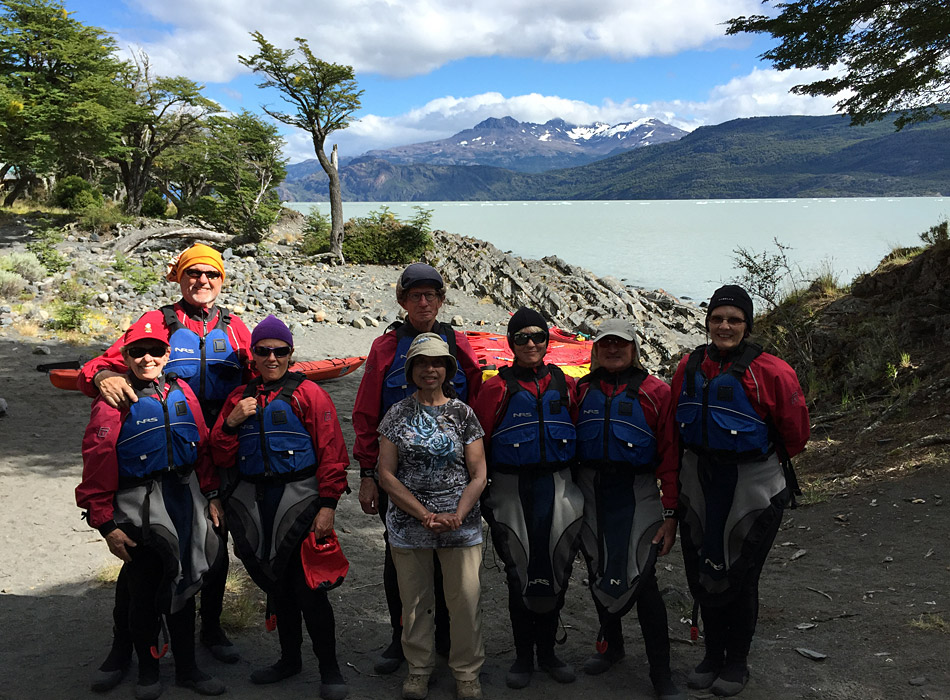 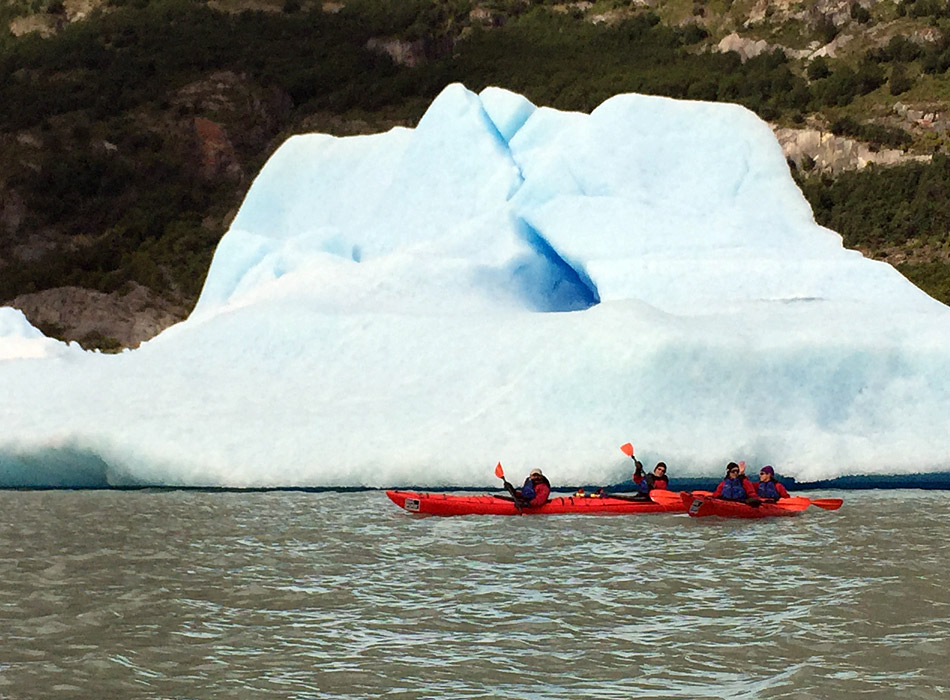 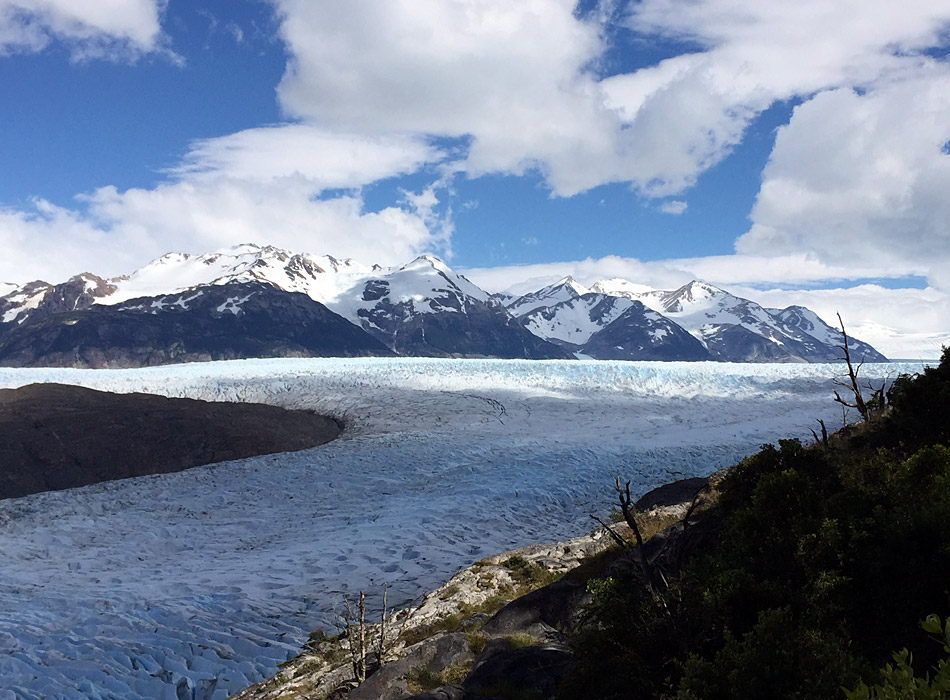 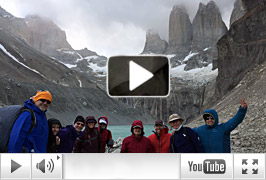 I am just back from Patagonia with IMG and had a wonderful time. Tye did a great job; he was the perfect host/leader. He was very personable with excellent attention to detail. I felt that he really cared about each and every one of us — how we felt physically and about the trip. For a new trip, it seemed seamless to me. I really liked the itinerary — the side trip to Serrano was a real treat. I have told all of my friends about what a good time I had with IMG, and how well I was taken care of.