Patagonia, known for its high winds and harsh weather, proved just the opposite for this year's Patagonia Trek. We took our lumps, don't get me wrong, they were just confined to the airport on the way down. Most of us missed our flight from Santiago to Punta Arenas, forcing a 2am flight and 6am arrival, thus negating the hotel stay — not to go unused, we took showers, a quick nap by some, and had breakfast. After breakfast and getting to know Dave (no travel troubles for Dave) we did a quick lap of Punta (statue, money exchange, grocery store) then hopped in our awaiting van. On the drive the gang got to know our Chilean guide, Tadeo. I've known Tadeo for a few years now and look forward to working and laughing with him on the trail — great guy and a wealth of Torres del Paine knowledge.

First stop was the Penguin Reserve. How can you not love these little guys?! After a quick visit with the penguins it was back in the van and we continued on to Puerto Natales. Once in Natales, we checked into the hotel and some (not naming names) took a nap, others ventured out on the town a bit. We all came back together for dinner at La Rustika — a nice little spot featuring some great classic Chilean dishes. We all got to know each other a little better and went over the itinerary one more time.

Early breakfast and in the van for an anxious two hour bus ride. After a couple photo-op stops and some last minute packing, we hit the trail around 11am, not bad. Uphill out of the gates, and warm, but it felt good to get the legs, lungs and heart working. First stop was Refugio Chilleno, our hut for two nights. We checked in, dropped off the non-essentials (sleeping bag, etc.), had some lunch and pushed on up to The Towers (aka Los Torres). It's about an hour to the break in the trees and our first real glimpse of the towers, and another 45 minutes or so to the lake at the base of the towers. It was an absolutely perfect afternoon up there. We hung out for an hour or so, took some photos, watched Kristyna take an awkward photo or two with a stranger, and just generally took the moment in. We wrapped up the day back at the hut.

Day 2 on the trail is pretty awesome... The Silence Valley. We loaded up the day packs (in perfect weather) and made our way up towards the towers again, but this time we kept on going up the valley. The trail takes us right along the river's edge, through Japanese Camp (climbers only) and up a creek bed and eventually breaking out of the trees. The Silence Valley is great for a lot of reasons, the biggest one for most folks is the fact that, due to the special permit required to get into the valley, we have it all pretty much to ourselves. I think Dave counted 6 people in the valley the entire day. The trail skirts the moraine of the Ascencio Glacier and is shadowed by granite peaks on both sides. Today is just a day hike so we're able to go as far as we want up into the valley. We made it far enough to see the backside of the towers, a point of view not seen by many trekkers in the park. Back down to Chilleno for the night.

Day 3 is a pretty cruiser day. Full packs, but most of the day is spent walking slightly downhill and to the west along Lake Nordenskjold. Another warm day on the trail. We stopped off at a small lake for a little siesta, then continued on to our second hut, Refugio Los Cuernos. Everybody loves this refugio — it sits right at the base of Los Cuernos and lakeside on Lake Nordenskjold. Beautiful sunsets and sunrises are a common occurrence here. We pulled into the hut around 2:30 or 3:00, settled in, checked out the beach, and just generally enjoyed our little place in the world. We may have had a glass of wine or two.

The Bader Valley is the highlight of Day 4, and one of my personal favorites in the park. It's another special permit valley so we had it all to ourselves again this year. A steep start to the day, with just the day packs, mellows out later in the morning and into the afternoon as we make our way up the valley. It was just our team on a climber's trail marked by cairns for as long a day as we wanted; we hiked until about 1:00 then found a nice spot for lunch. We watched the condors in the thermals above and then made our way back to Los Cuernos for a shower and a cold beer.

Not to be out done by the Bader Valley, the French Valley on Day 5 is another jaw-dropper. Things really start to open up 3-4 hours from the hut and this year we were able to take a trip down to the glacier and a waterfall, pretty cool stuff. After the French Valley it was just a few hours to our next hut — Paine Grande. The biggest of the huts and perfectly nestled down at the shore of Lake Pehoe with Paine Grande and Los Cuernos as the backdrop. Just one night here.

Day 6 on the trail is a relatively short one. Just 4 hours on the trail today walking along Lago Grey and the icebergs silently floating therein. Once at Refugio Grey we went down to, for lack of an official name, "Iceberg Beach" and soaked up some sun and listened to the gurgling sounds of the icebergs settling.

On Day 7 it rained for the first time all week... After a 2-hour rain delay we put the day packs on in search of a good viewpoint of Grey Glacier. After a couple hours, a couple bridge crossing and a couple ladder crossings the team had their views. The rain literally stopped, the clouds parted for just long enough to get some great views (and photos) of the glacier. Back down to the hut to dry out, take a hot shower, and settle in to the couches with a book or a game of dice.

We knew that there was kayaking at Grey Glacier, but we knew we needed some good weather. When we pulled in on Day 6 things were a little unsettled and the water was quite choppy. Day 7 was a no go as well. Our last hope was the morning of Day 8 and sure enough, the water was nice and calm allowing us to get out on the kayaks for a couple hours to get up close to some icebergs and the Grey Glacier itself. If you want to feel small... get in a kayak and paddle up next to that glacier! After a couple hours in the kayaks and lunch we were on the Grey II for our journey across the lake... not before a pisco sour chilled by glacier ice and a side tour up next to the glacier itself.

We thought the glacier was the icing on the cake... not the case. On the drive back to Natales, our van spooked a puma from a bush. Once the puma was a safe distance away, we all hopped out and kind of just stood there not believing that that had just happened. Incredible. We made it back to Natales, and after some quick showers we had our farewell dinner where we recounted our favorite moments on the trail. Oh yeah, and Helena threw her steak on the floor. 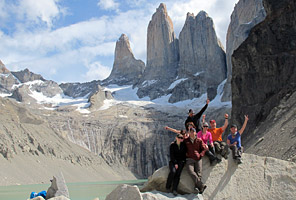 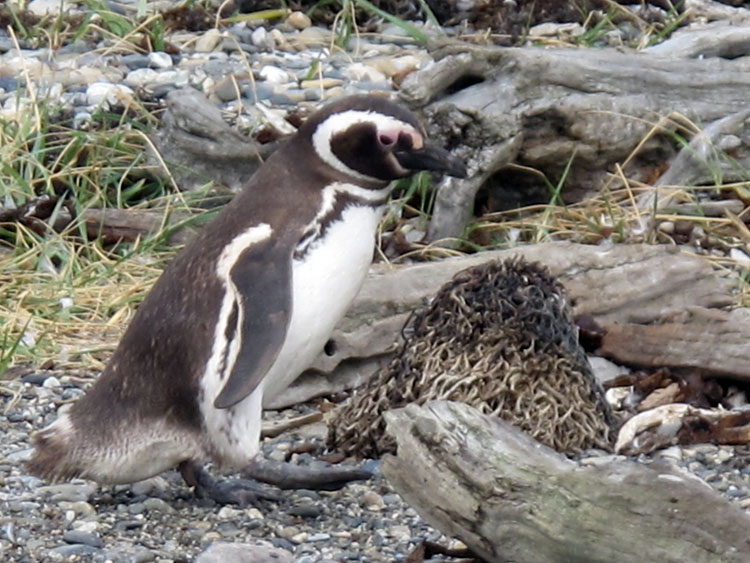 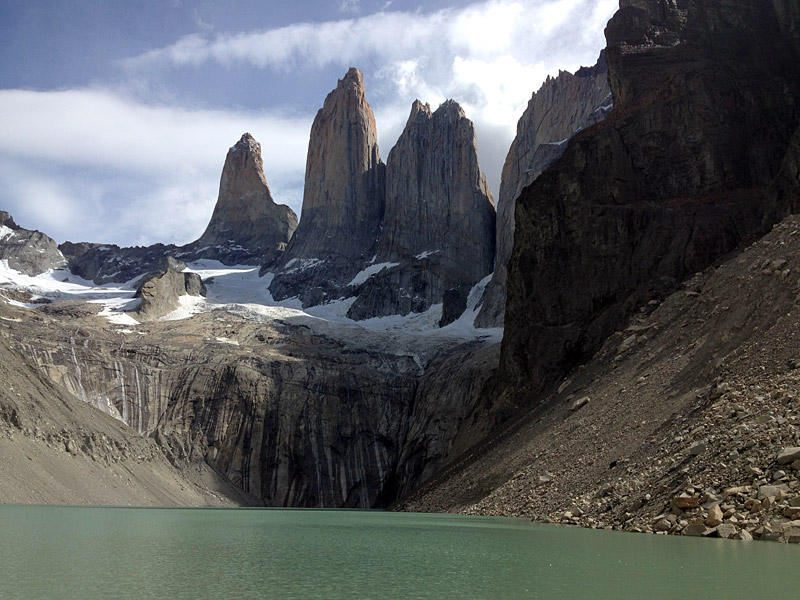 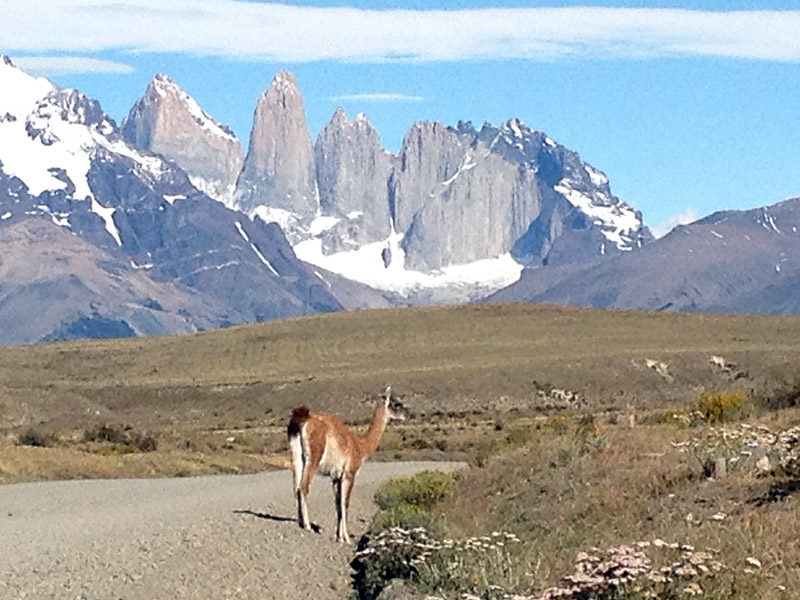 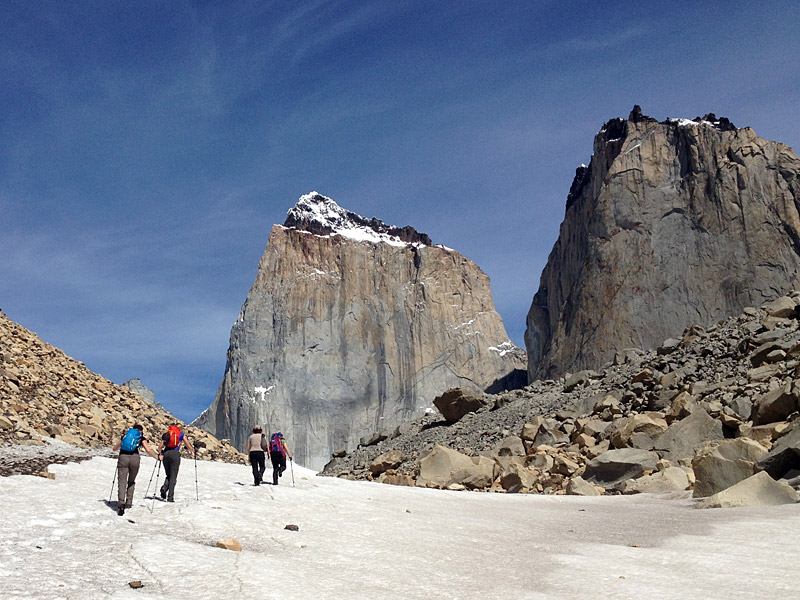 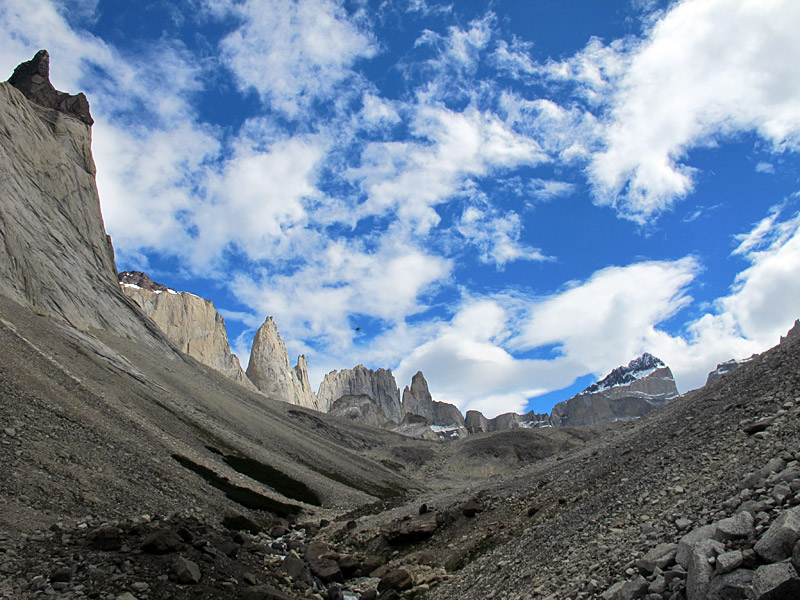 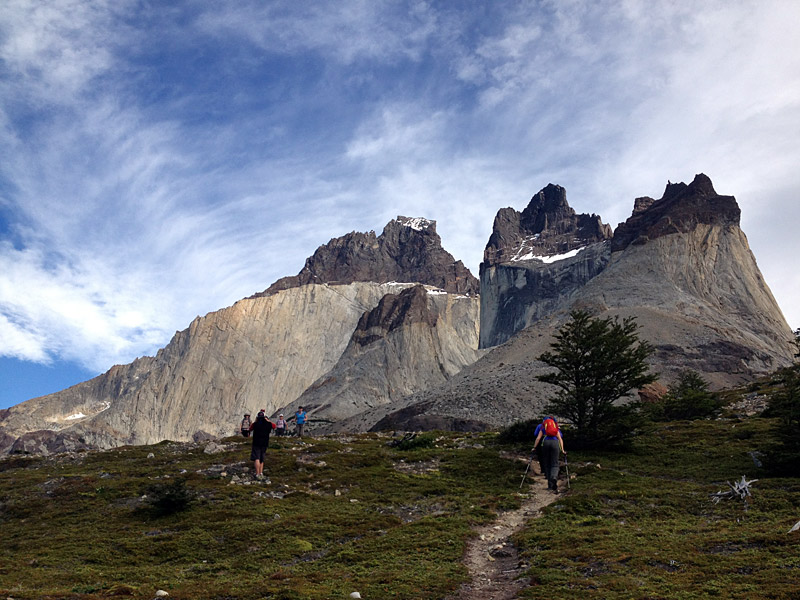 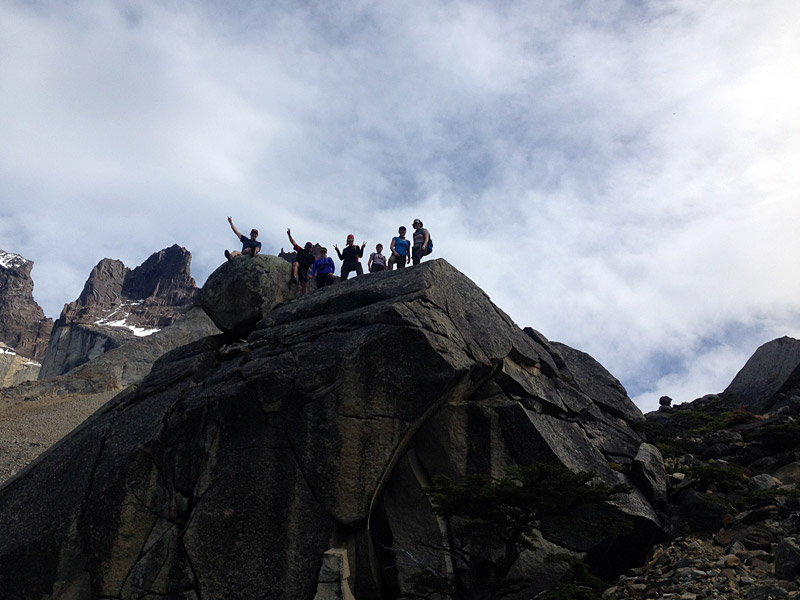 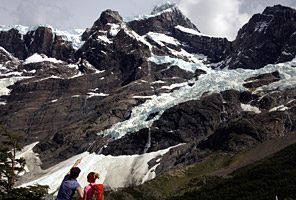 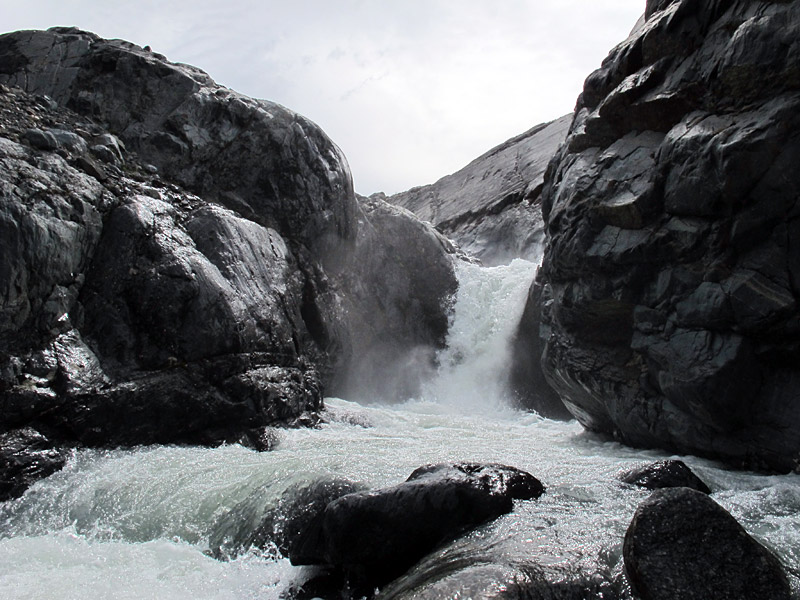 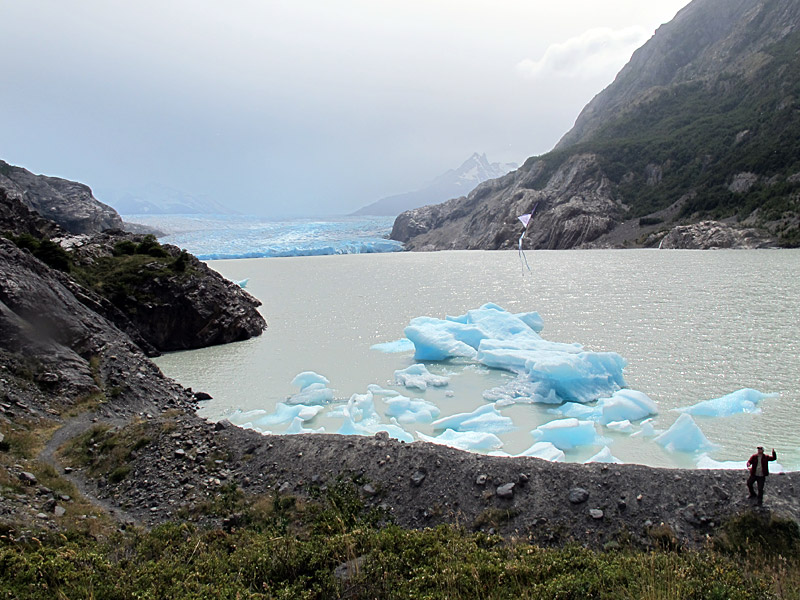 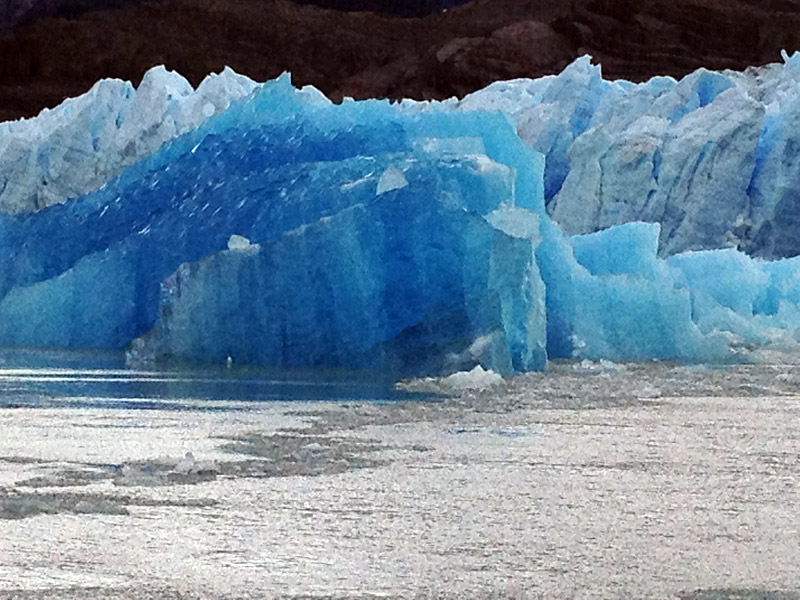 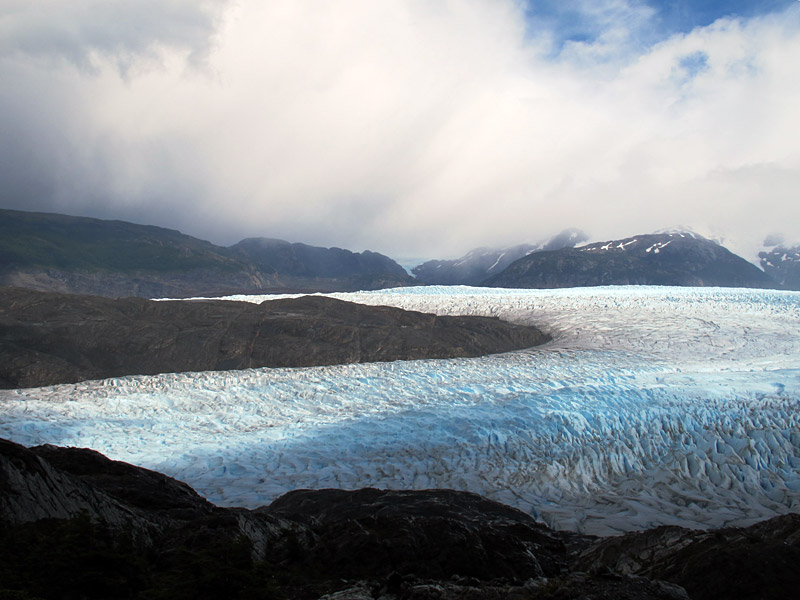 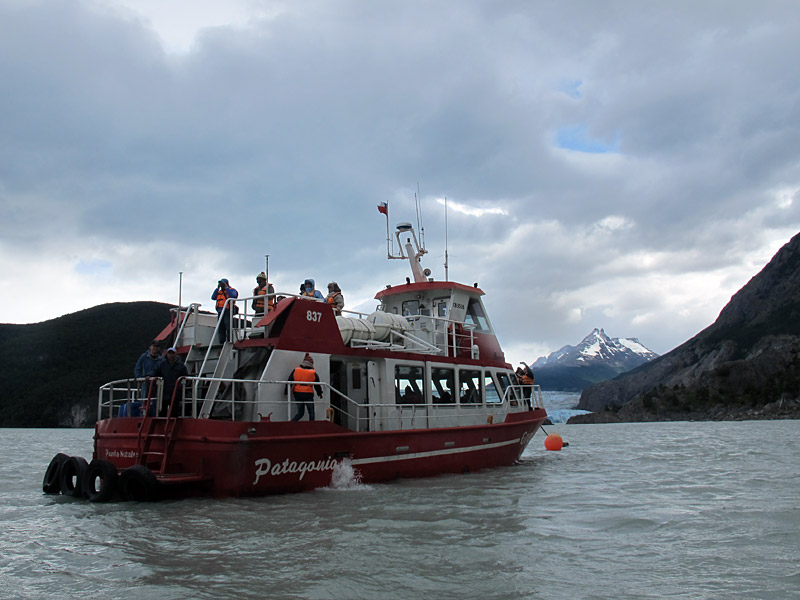 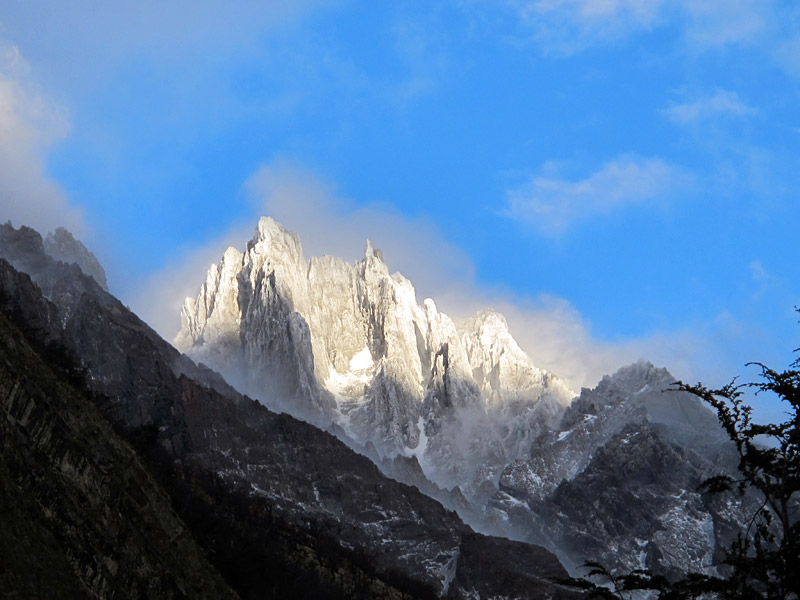 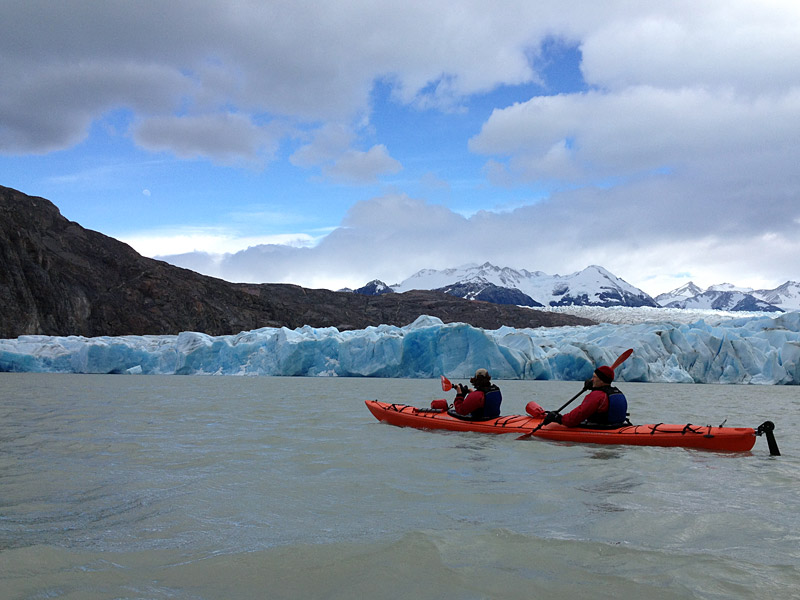 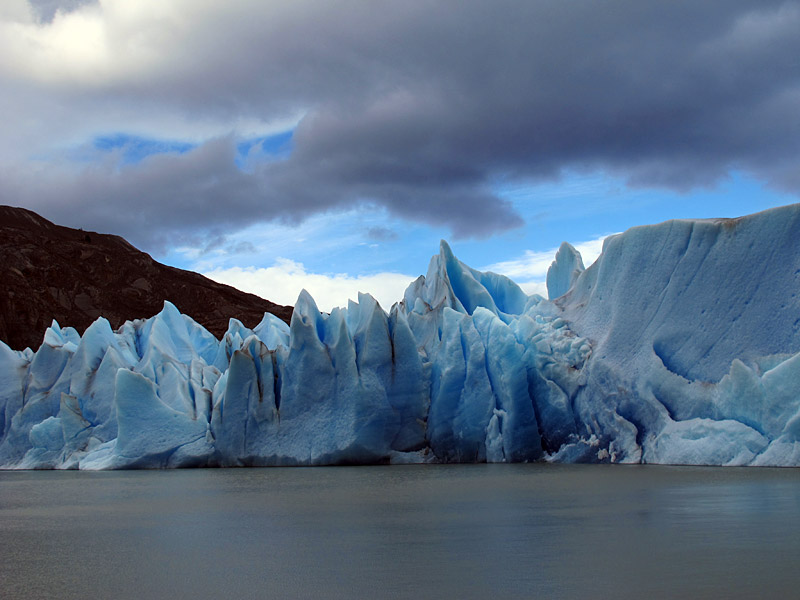 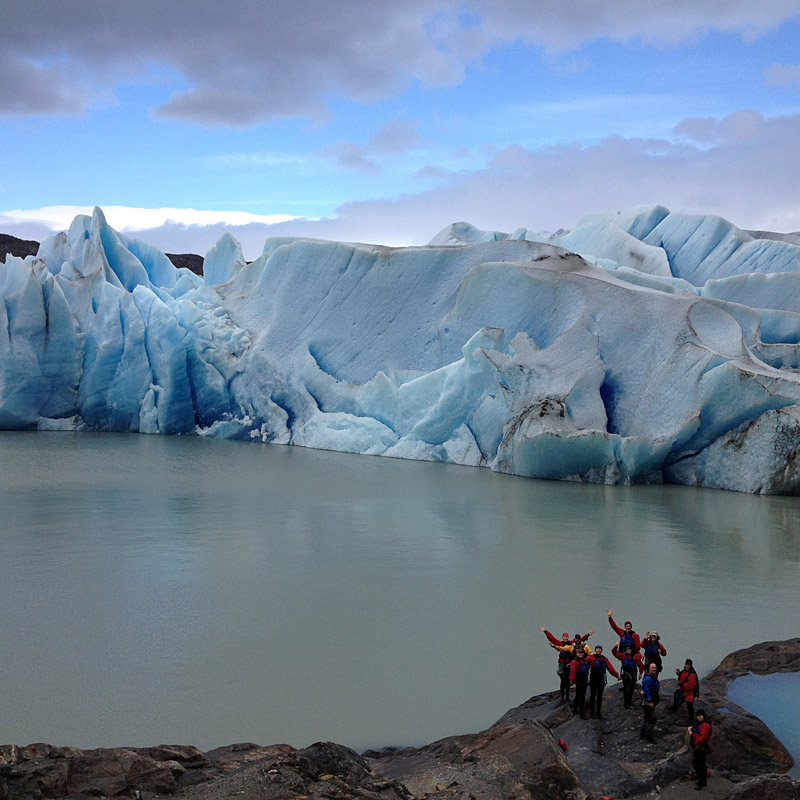 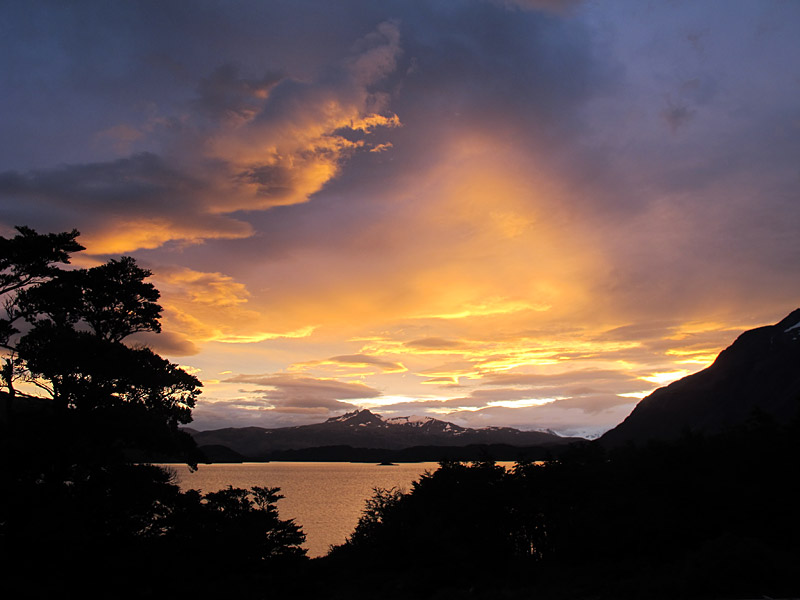 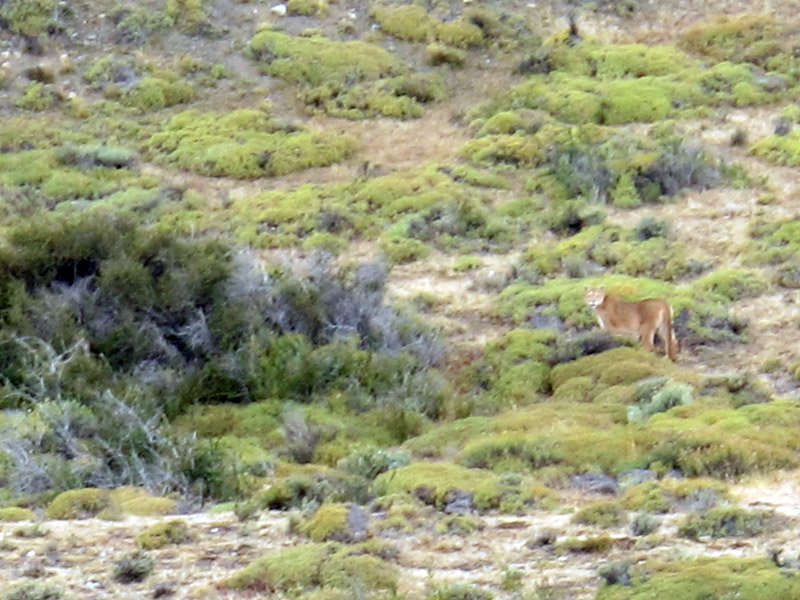 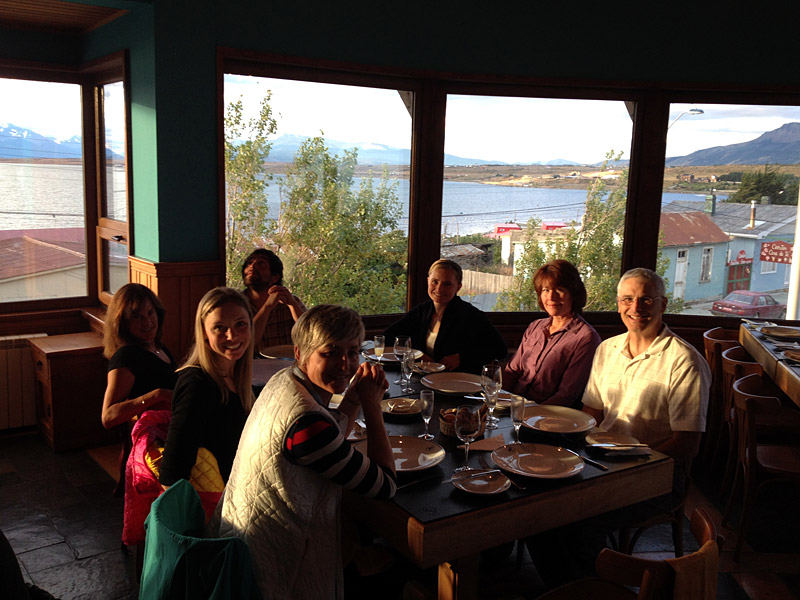