Most know about the Khumbu Valley in Nepal and its rugged high altitude mountains. We also hear about the unsupported expeditions people take in the Himalaya where they don't see people for weeks. Climbing Mera Peak in the Hinku Valley is a combination of both. It is away from the hustle and bustle of the Khumbu but still has the rugged peaks and the luxuries of tea houses, delicious food, wifi and warm beds.

Travel days and Kathmandu (US to Kathmandu): After a long day of travel from our homes with our heavy duffels in tow, we arrived in Kathmandu and settled into Hotel Tibet. After a shower and nap, we jumped immediately into gear checks. Luckily everyone followed the gear list to a tee and there was plenty of leftover time to explore all the wonders of Kathmandu before our flight to Lukla the next day.

Kathmandu to Lukla then to the Hinku Valley: After an early breakfast it was time to start the duffle shuffle to Lukla. Weather being true to form it was changing by the minute. After some time, we decided a helicopter was our best option. The Helicopter was one of my favorite experiences! Once we made it to Lukla it was time for dinner and a quick walk around to check out the shops. The following morning, we woke with the excitement of another helicopter ride waiting for us. After another great meal at the Paradise Lodge, we loaded up at the heli pad and flew to Khote in the Hinku Valley. 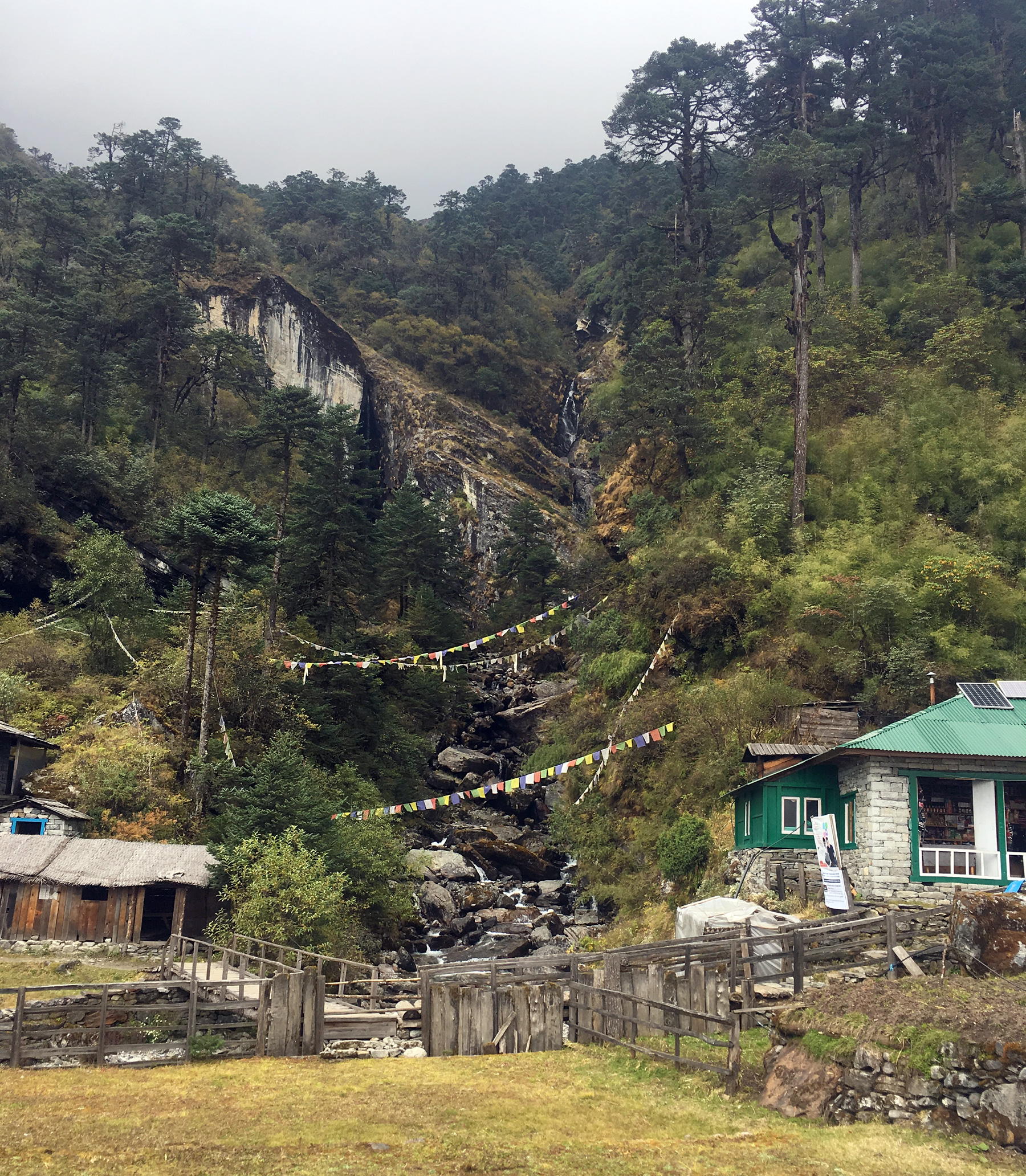 Khote to Thagnak: We spent a few days in Khote, taking acclimatization hikes up to about 13,500ft. After two nights, it was time to make the move to Thagnak. On this move you get your first views of the surrounding mountains. The four-hour hike went by quickly as we took in the massive peaks surrounding us. Once at Thagnak, we were fully surrounded by mountains deep in the Hinku Valley. 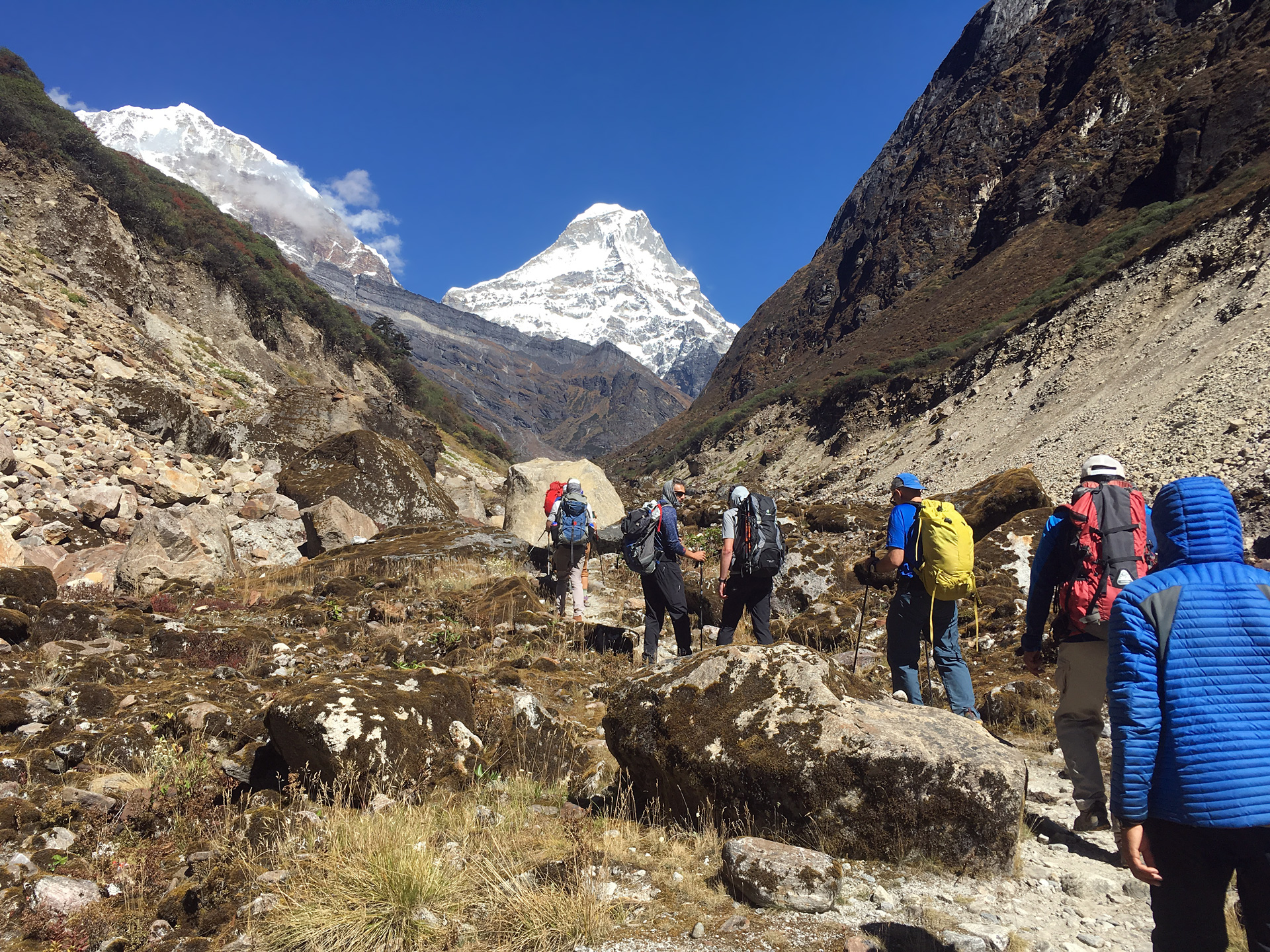 Thagnak: Thagnak sits at 14,271ft and it was our home for three nights. On our first day in Thagnak we went up to a lake called Sabai Tsho at 14,500ft. From the lake we had a great view of Mera and the surrounding mountains. On day two we hiked up to a view point and topped out at 16,400ft. This was a test for everyone as the trail got steep towards the top and we could start to feel the effects of altitude. But we were greatly rewarded with views in every direction. 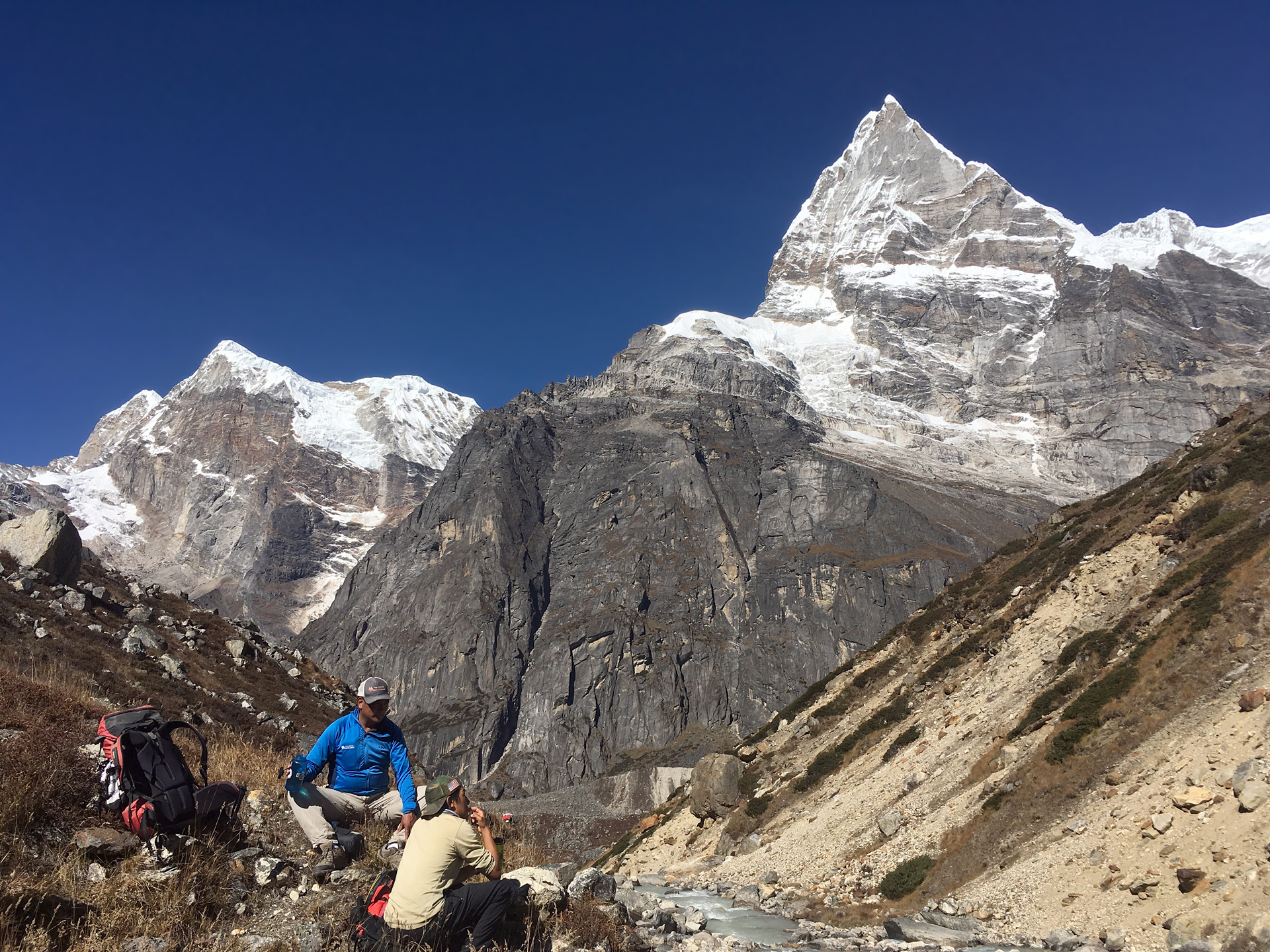 Thagnak to Khare: This was a beautiful three-and-a-half-hour trek. Once we arrived in Khare we were greeted with an espresso machine and a delicious bakery! After a great lunch and too many espresso shots to count we decided we might as well do some more hiking with the time left in the day. The hike took us up to 17,200ft and yet again, the views were spectacular. 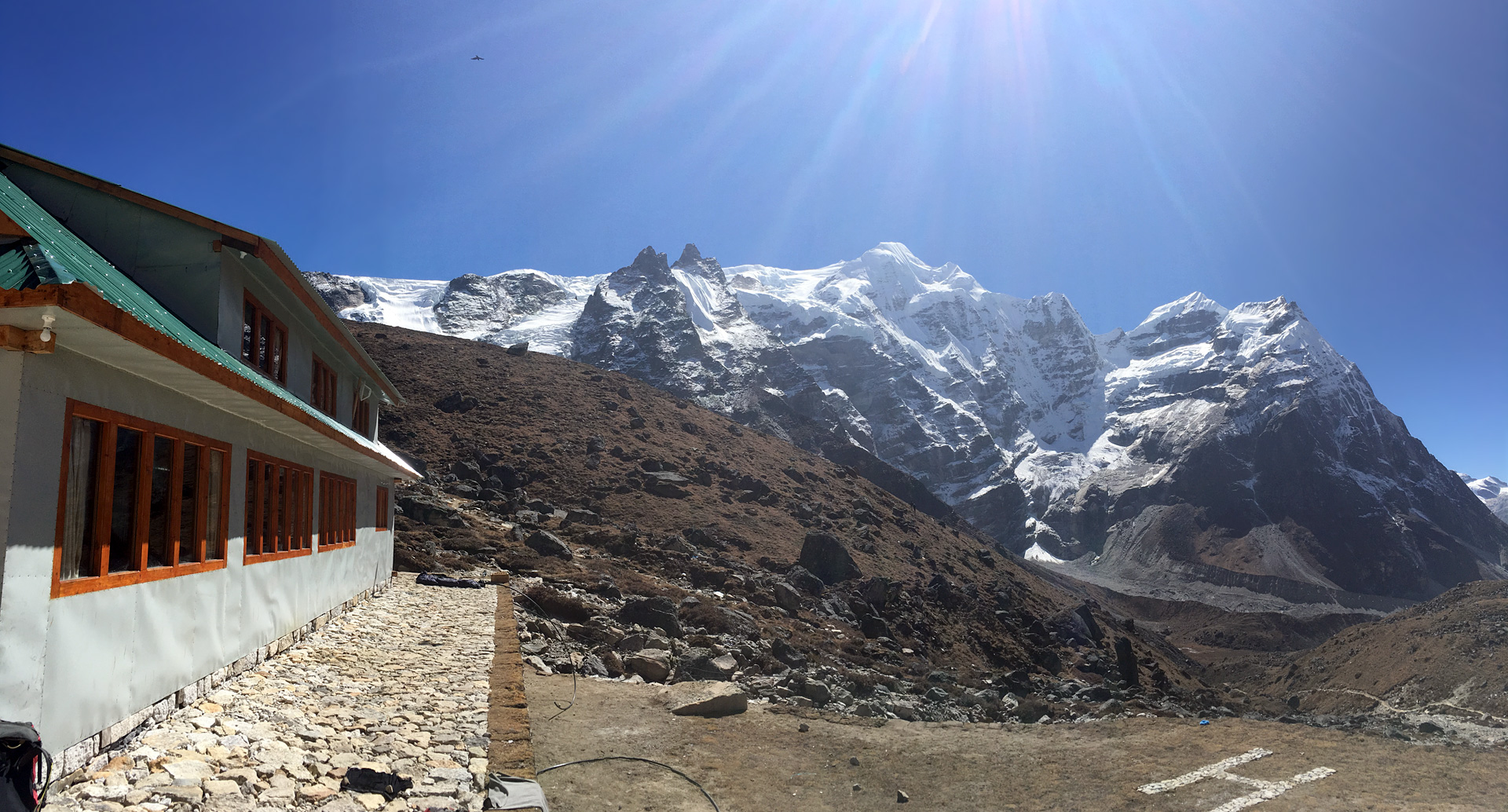 Khare: This village sits at 16,400ft. We spent two nights here. The tea house was truly something special. The view of Mera from the tea house was breathtaking. Our day in Khare was spent refreshing foundational mountaineering skills including walking techniques, how to walk with an ice axe, glacier travel on a rope and moving on fixed lines. After an early dinner, it was time for bed because the next morning would come early and it was time to start climbing.

Khare to Mera La: After breakfast and a few hours of trekking we arrived at Crampon Point. Once we donned our double boots, crampons, helmets, and ice axes it was time to refresh our crampon techniques and ice axe self-arrest. Once we arrived at Mera La we were greeted with soup and an early dinner; then it was off to bed early because of an early wake up time for the summit push. 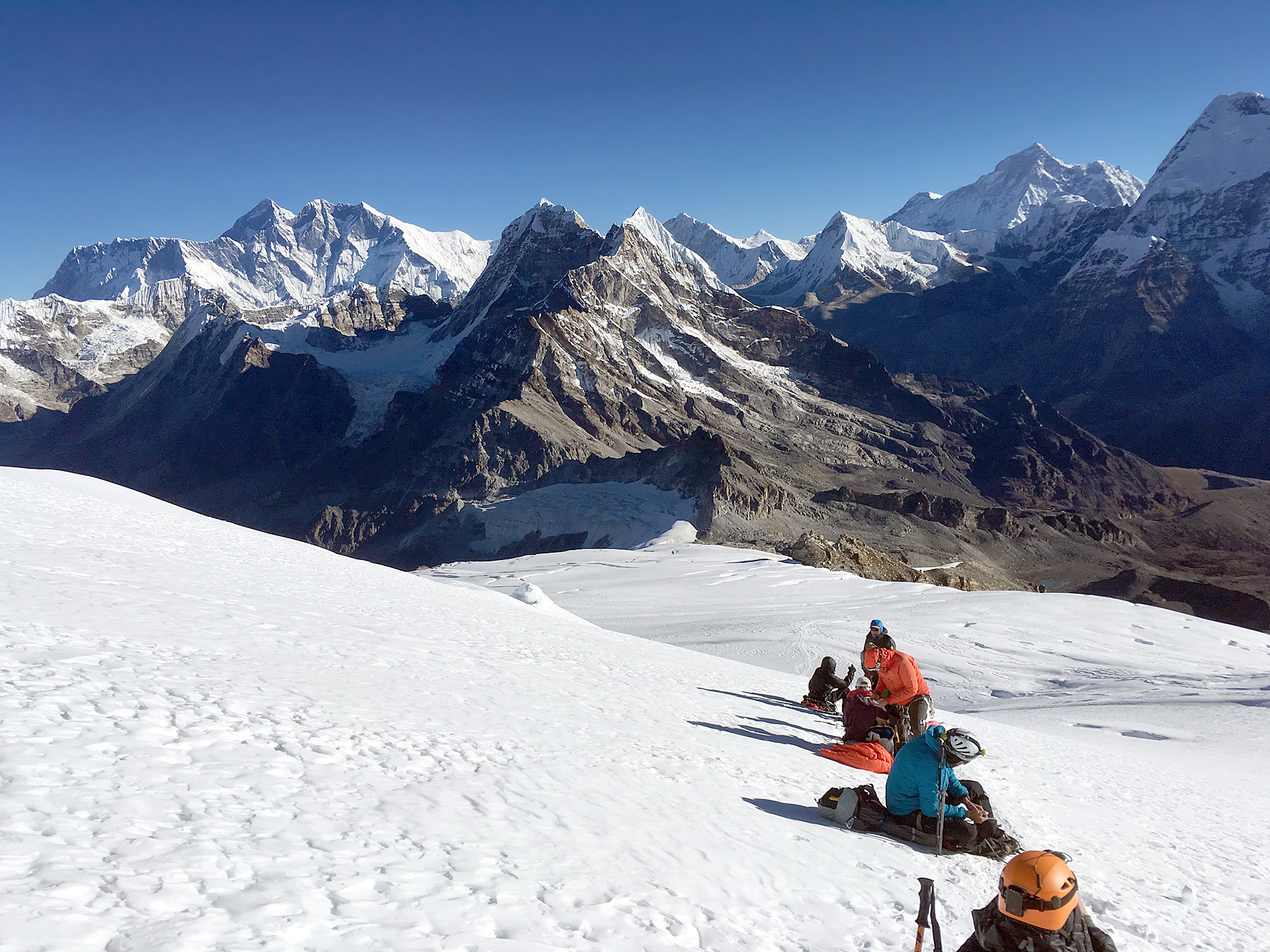 Summit Day: We woke up at 2:00am to a beautiful clear night without a breath of wind. After a quick breakfast in our tents we hit the trail. As we rolled into our second break, we were greeted with a wonderful sunrise and views of Kangchenjunga, Makalu, Everest, Lhotse and Cho Oyu. After a few more stretches we were standing on the summit of Mera Peak! We made quick work of the descent and were eating lunch at Mera La before we knew it. 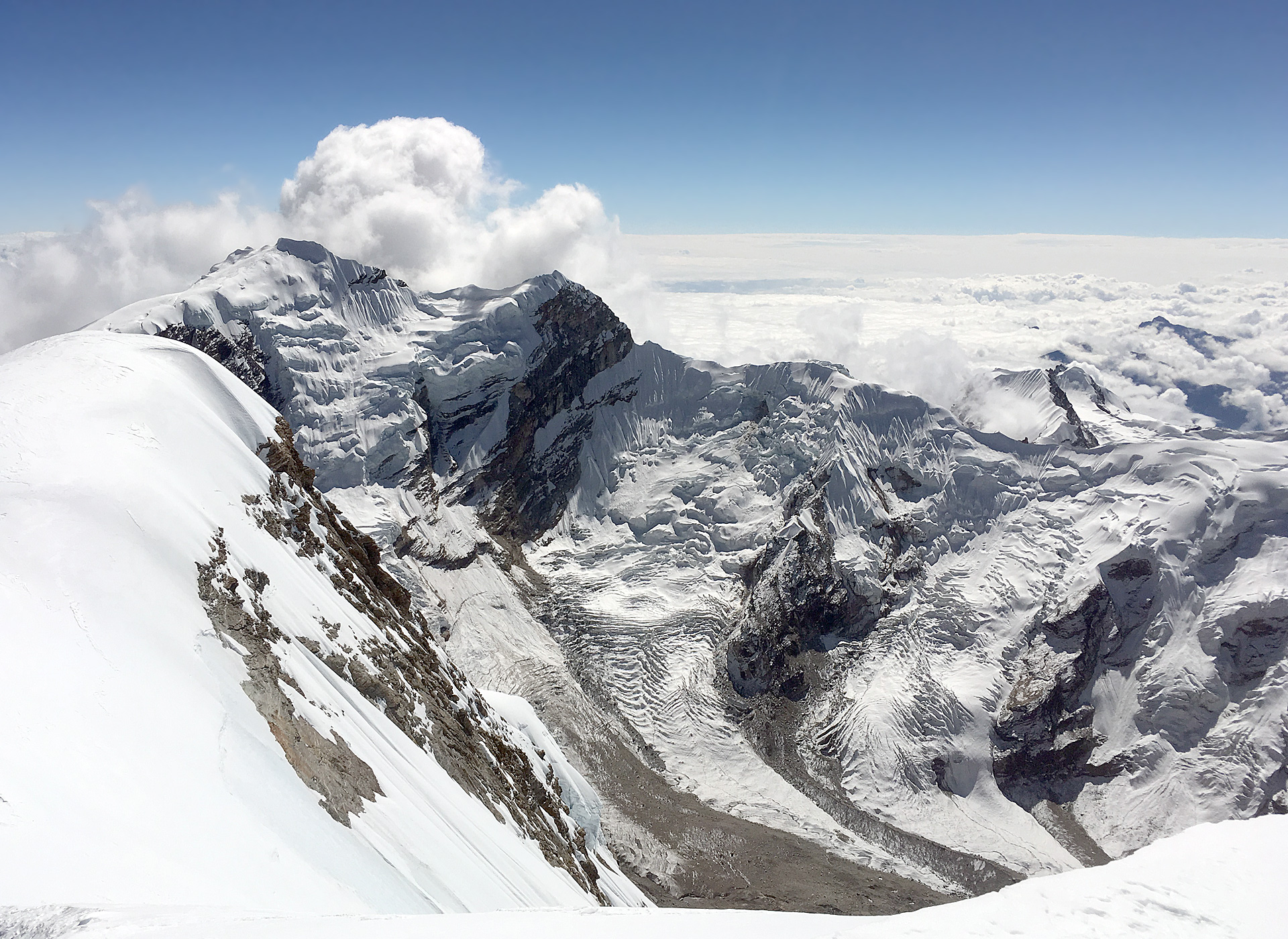 Descent: We spent one more night at Mera La and then started our journey home. Once back in Khare we had a much deserved lunch before continuing on to Thagnak to spend the night. An easy walk to Khote the next day to catch a helicopter to Lukla. 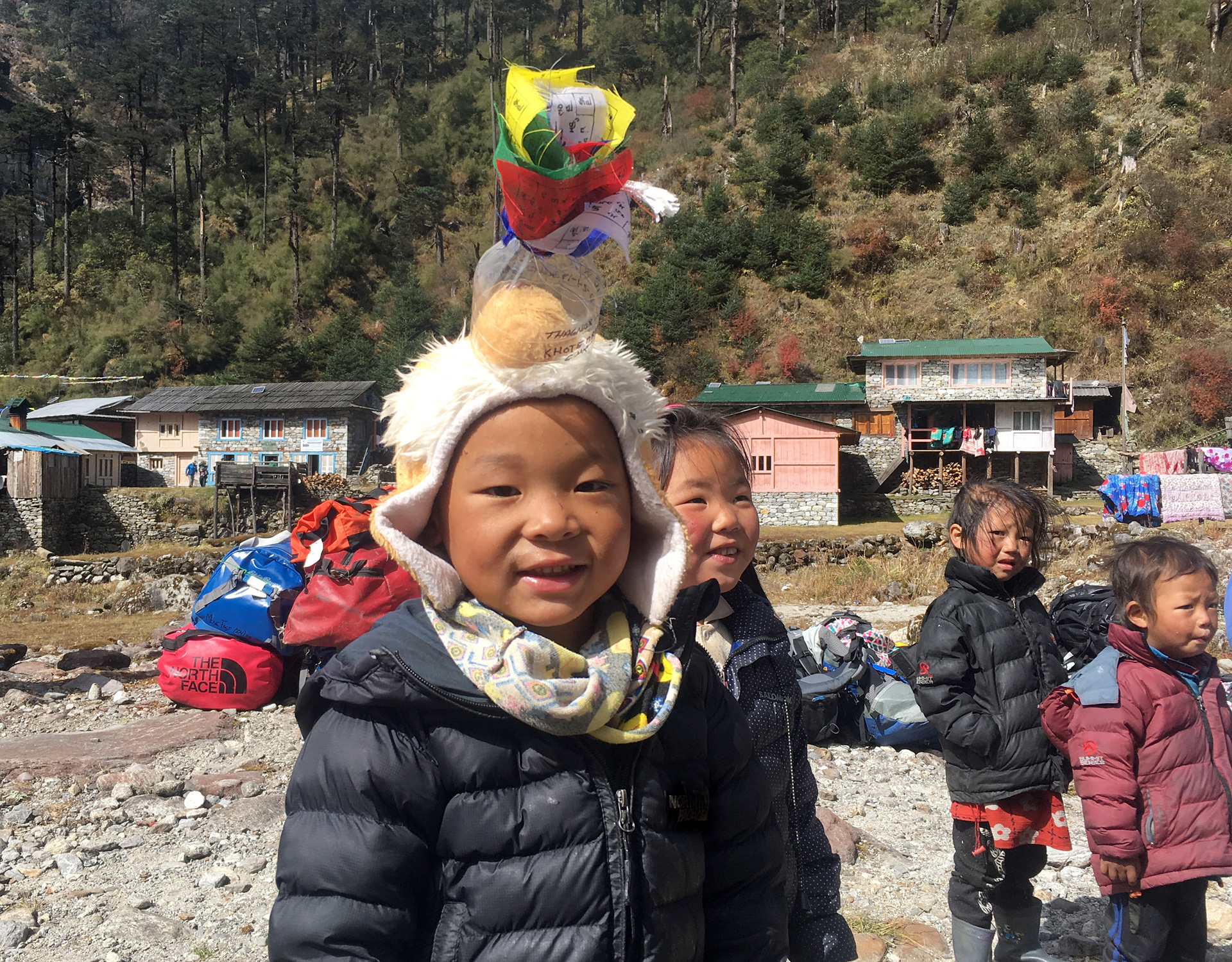 Conclusion: To anybody who's thinking about signing up for this trip, all I can say is: go soon, before the rest of the world discovers how magical the Hinku Valley is! 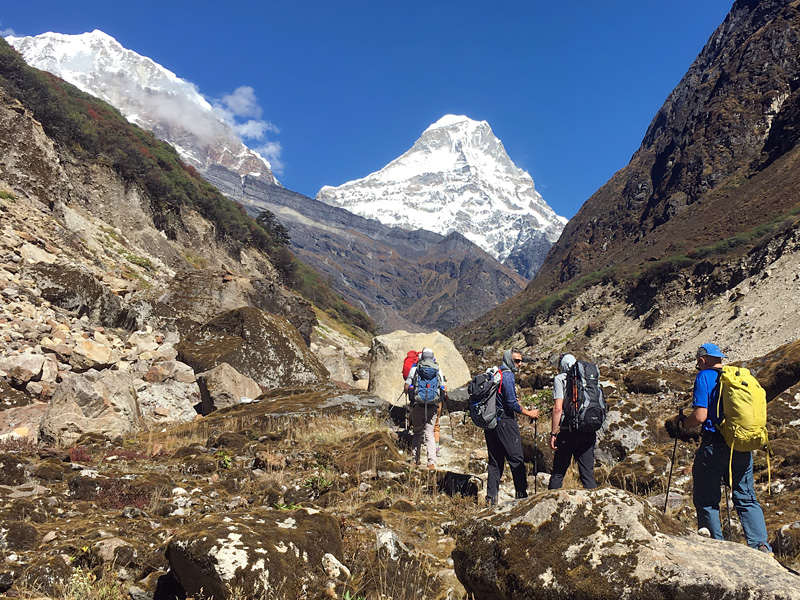 I can't say enough good things about both the logistics and the staff. I had plenty of ideas about how the trip should go and what was possible. Your expedition service surpassed all my expectations, provided me with the best opportunity to summit, even compared to the super expensive guided trips, and as such, I was successful in fulfilling a dream of 20 years. I will recommend your service to anyone interested. It was simply the best on the mountain.

Thanks for running such a top notch service. I had some anxiety going on a guided trip when I signed on, but the trip was so fabulously run and conducted with such a fun atmosphere, I wouldn't hesitate to go on another trip with IMG, and I enthusiastically recommend you to anyone looking for a guide service.