"Is the sun coming up going to
bring me more oxygen?"

It was about 04:30, and I was on the side of a dusty mountain at 17,000 feet with chilled feet and tingling hands, feeling generally miserable. This was my first time above 14,410 feet, and I was really starting to feel the altitude. What was I doing here?

For the past five days, Kilimanjaro had been so enjoyable. Trekking up through the lush rainforest, enjoying how our Chagga guides made a point to locate the famous and delicate impatiens kilimanjari flowers, seeing my first glimpse of the snow capped summit on the trail and admiring the strange trees growing on the Shira Plateau (curiously wondering if I had stepped into the pages of a Dr. Seuss book) were just some of the highlights of the days before.

But now I was struggling to keep a smile on my face as my entire body seemed to be frowning under the strain of the thin air. My thoughts weren't completely clear, but I wondered why I had not decided to take a little bit of the edge off by medicating against the altitude. I was angry at myself for potentially causing unnecessary discomfort and added strain. At Barafu Camp (15,000 feet) I was feeling rather good, but now the story was changing. Negative self-thoughts filled my mind as I began to determine that the next high-alti climb — should I make it through this one — would be significantly improved by the use of altitude medicine and that my prideful thought about how cool it would be to summit without taking Diamox, was in fact one of the most stupid thoughts I'd ever had.

In between thoughts of how my body was not cooperating with the lack of oxygen and kicking myself about not prepping appropriately, my bad attitude was becoming a potential obstacle looming in the foreground of Uhuru Peak. The situation was what it was, so I had better get my thoughts in order and do so quickly.

Why could I not remember how beautiful and pleasant each previous evening had been? Surely that could bring encouragement. Gazing at the star filled heavens each night after watching the sun descend through a thick sea of clouds below was nothing like I'd seen before. The rhythm of the sounds of the porters at camp each night became familiar and comforting over the past few days. Adjusting to my "new routine" of mountain living was an accomplishment in itself given my proclivity to cleanliness and lots of creature comforts.

Still, every bit of the trek, even the longer and harder days, had been full of a good time. Our team was comprised of unique and fascinating individuals, each with great attributes to add to the dynamics of the team. Evening dinner conversations and learning how to play "Celebrity," always kept time at camp lively. The camp staff was just as wonderful. Meals were fulfilling and the porters amazed us with their seemingly superhuman stamina wearing clothing and gear that would continually make me humbled as I walked "pole, pole" uphill.

And then there was the Mountain. There is an intangible but priceless blessing that comes from the opportunity to be off-grid and in God's country enjoying Creation. There's a lightness and peace that leads each climb and personally whispers to me to remember "my Creator in the days of my youth." Sometimes I would wonder if a vista had been hand-fashioned by the Master just for me to behold such exacting artistry.

In contrast to the lightness of the previous week, at this moment I was literally in complete darkness. If I could push my thoughts past the building darkness to dwell on the right things, there was no shadow of a doubt that I would make the summit. The veil of blackness engulfed our crew and the laboring motions of headlamps above and below the trail only brought brief glimpses of light. The noise of concentrated breathing and the heavy steps of the multinational crowd scurrying and struggling up the mountain around me did little to provide relief that I was in this with other mere mortals. The only consolation in the blackness of the summit attempt was the moon shining brightly. Just like the moon was a lesser light to rule the night, I was provided with just enough strength to help me rule my spirit. As I gazed at the moon, my boots continued the upward slog, even though my will struggled to find the motivation to keep me going.

Mentally I assessed my physical performance: slightly cold in my extremities, but nothing to cause alarm. I would come home with all my fingers and toes. My legs felt strong as a result of the elevated training I had put in previously. My energy levels were high and I didn't feel "hangry" because of low blood sugar. I had purposed to keep eating a lot at each break and kept up on my hydration. Even my cardio didn't feel taxed in the sense that I was "working hard." The reality, though, was that my system was depressed by the lower levels of oxygen in my blood stream. Every few steps I struggled to keep my eyes open. Frequent yawns often interrupted my breathing. In a sense I felt sick, but was keeping everything together as best I could. A headache was starting to come and go, but I was ok. Acute mountain sickness is the medical term for what I was beginning to experience. I wanted this to be over, but we were still walking uphill.

I wasn't alone in my fight to climb Kilimanjaro. Altitude was affecting each person on our team; some regardless of their taking doses of altitude medicine at the beginning of the climb. We were together in this battle for the summit, but truthfully I can't say what degree of difficulty this endeavor was for the rest of the team. My generally friendly and caring demeanor was replaced with introversion and self-absorption in order to deal with the issues I was feeling. I didn't talk much and our group became rather quiet too. Were they also fighting their way up with mountain and finding that their biggest battle was something that they couldn't train? At the IMG office I've talked frequently of the affects high altitude to our customers, but now it was real to me. Did I have the mental toughness necessary for this terrain?

By this time the moon had disappeared over the shoulder of the mountain. We had no light to guide us in the depths of our struggling thoughts and increasingly heavy steps. True darkness had set it. Unrecognizable to me at the time, and though I was about to "have a moment to myself," all hope was not lost. The team still had one strategic resource that could bring encouragement and the extra motivation necessary to reach Uhuru Peak: Max.

Upon first appearance, Max Bunce is an unassuming character. Certainly not someone many people would pick out to be an Everest summiter who in a previous life was also a physicist and dabbler in professional ski patrolling. An uneducated observer (or close friends) might describe Max as the "upper crust of dirt-bag guides." (In case you're alarmed, "dirt bag," is an "endearing" term in the mountaineering world.) Relaxed and laid back at all times, his demeanor and long history in the mountains embodies humble and true self confidence. After clocking multiple days up high on many expeditions around the world, Max knew a thing or two about the challenge each of us faced. Plus, he was the only one to have been up Kili before. It was time to get some guidance from a pro.

"Max, I may need you to yell at me a little, so I can get up this mountain," I told him as my voice crackled just a little with emotion. I hoped the struggle to speak clearly would be attributed to my heavy breathing. Max playfully "yelled" at me, but I didn't find the encouragement I needed. Privately I was becoming an emotional wreck, and though I wasn't ready to "call it quits," I was not having fun on the mountain. I suppose I hadn't been prepared for the emotional feeling of the challenge. I was focused completely inward, but Max as an expert guide could tell that the entire team needed a bit of a pep-talk. By this time, I had mentally decided that all I needed was more oxygen. My fuzzy brain kept me thinking about more O2, just like a thirsty man must think about water in the dry and barren desert.

We were taking a break and Max was ready to bring out the encouragement we needed to make it up top. His pep talk went something like this, "Hey guys, I know it's hard right now because it is dark and cold. Don't focus on how much higher we have to climb. It's about 5 o'clock and in just a little while the sun is going to come up and make it all better. Just focus on making it until the sun comes up and makes it all better." Not a bad pep-talk, right? Wrong. I must have had a case of "the high altitude angry's" because I was not happy with what he was saying. I knew exactly what was going to "make it all better" for me. More oxygen! Though I don't know my atmospheric science like Mr. Fancy-Pants-Physicist-Turned-Mountain-Guide-Max, I did understand that the higher I went up the mountain, the less oxygen there was in the air. Less oxygen in the air translated into less oxygen in my blood. I later apologized, but I couldn't help the next snotty comment, "Is the sun coming up going to bring me more oxygen?" Somehow my words brought a little relief to my conflicted mind. Then I cried, thankful to be sitting by myself. Max in his wisdom never returned my comment.

We continued onward as the dawn began to approach. Golden beams began to break through the eastern sky. The darkness was subsiding. My mind began to ease. In no time, the sun was glowing brightly from its course directly over the equator. After pulling out my sunglasses at our last rest break, it was only a little bit further and then I was standing at the Top of Africa. I had made it! Though the discomfort was still there, I smiled before the camera at the accomplishment of persevering. The relative warmth and comfort of the sun framed the moment as I stood before the famous "congratulations" sign. Our team celebrated with a few photos to commemorate the historic moment in each of our lives. I thanked Max for a good climb and was ready to start back to camp ASAP.

Each step downward gave me added strength as my body sucked up the thick air. Though it was a long day, my spirits were high and the sunshine added a bit of delight to the conclusion of the climb. I was looking forward to getting out to the Serengeti to view the wildlife. What I didn't know yet was that staying in a private tent camp on the African plain would be more spectacular than I could have imagined — a real treat after the hard work of the previous week. My mind drifted forward to a hot shower and some clean clothes and back to reflecting on the fact that only a few hours earlier I had completed one of the Seven Summits.

I smiled. Maybe it really was the sun coming up that had made it all better. 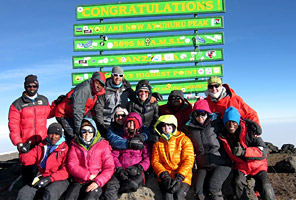 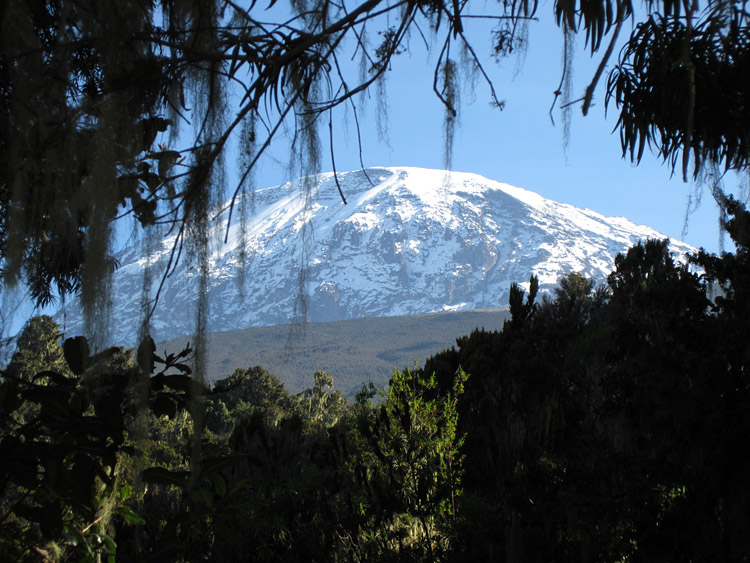 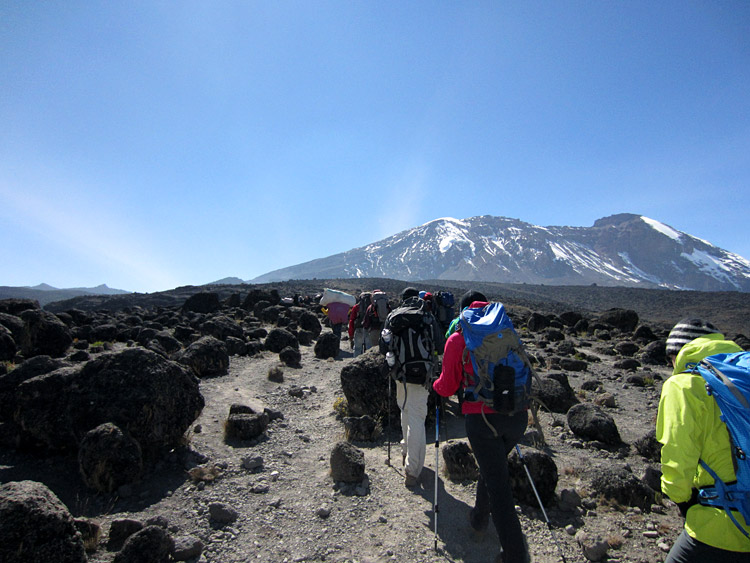 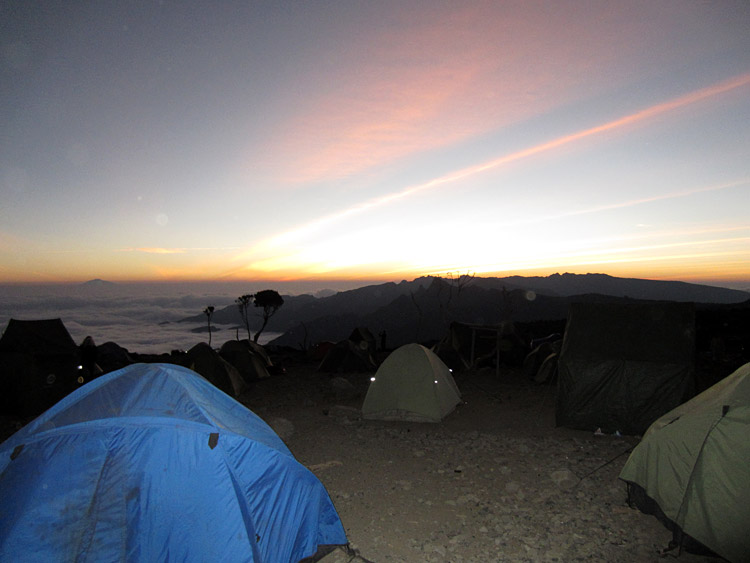 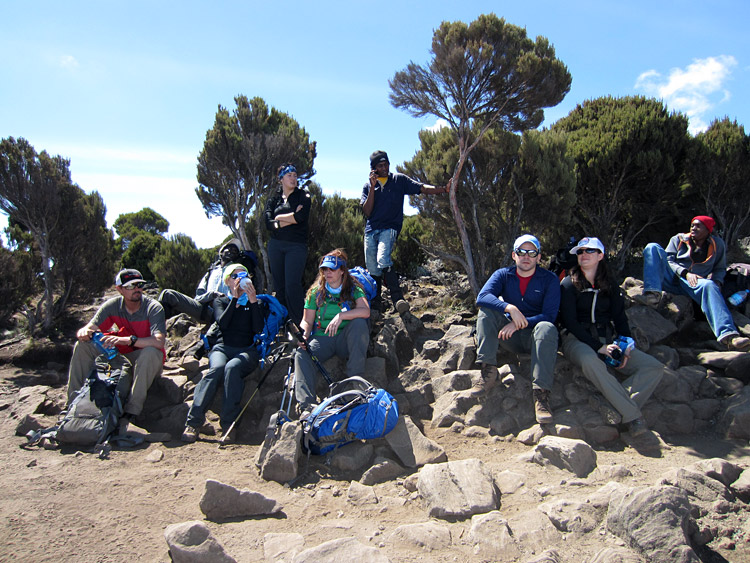 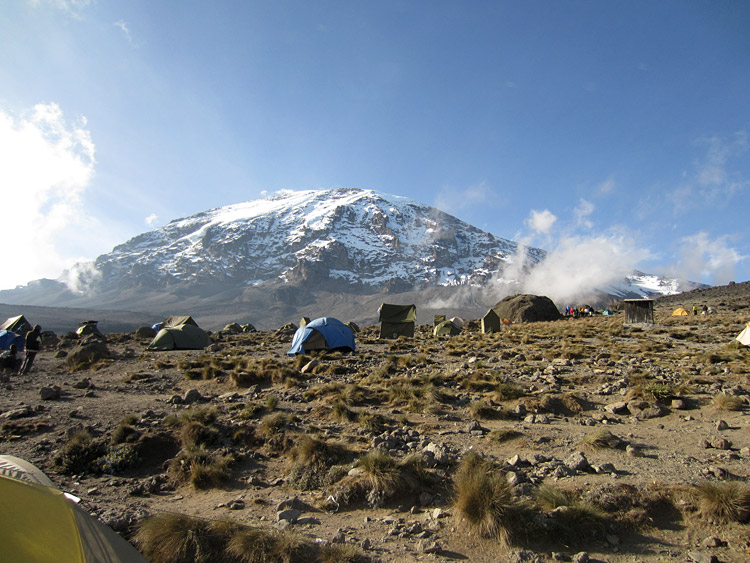 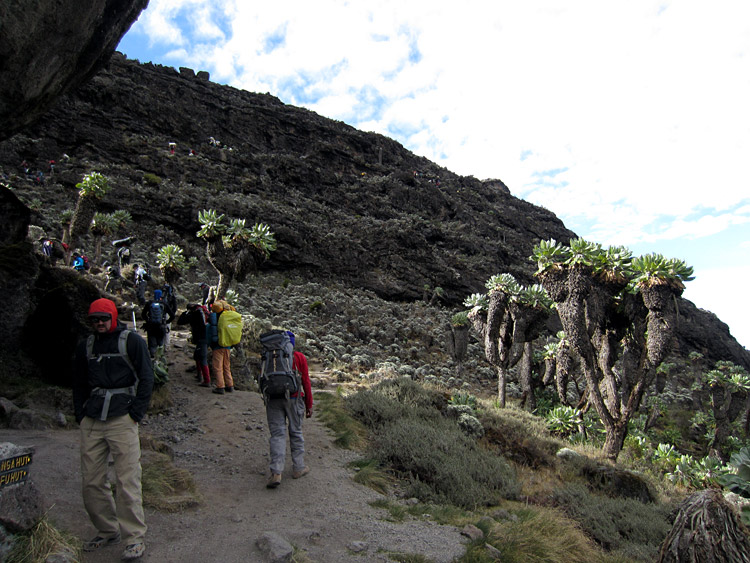 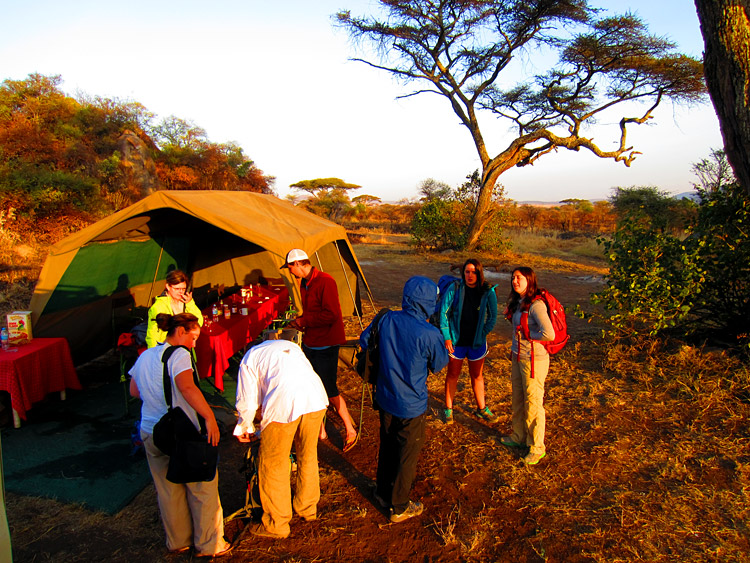 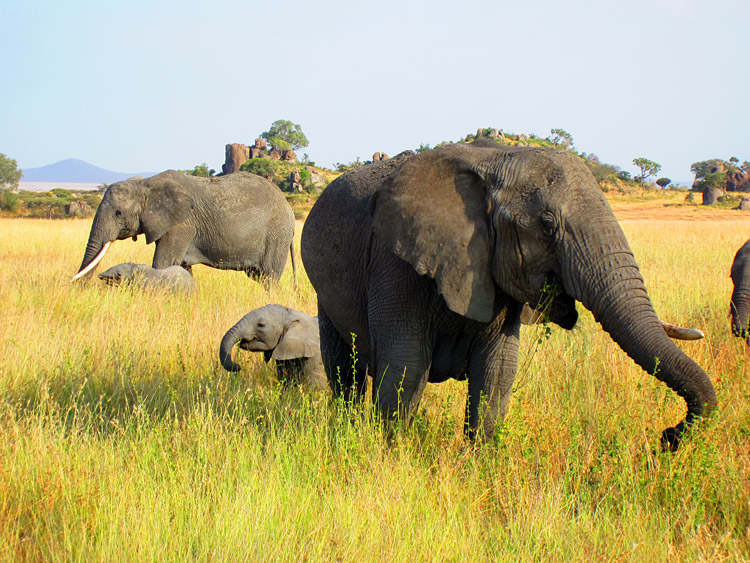 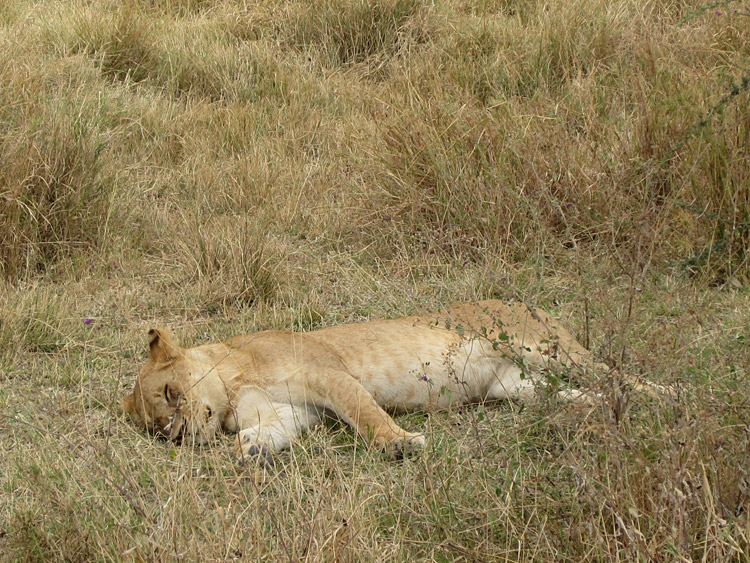 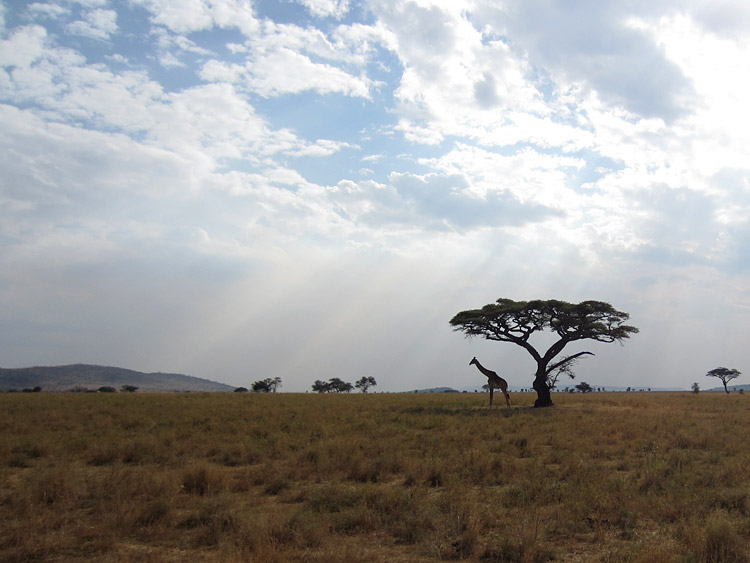 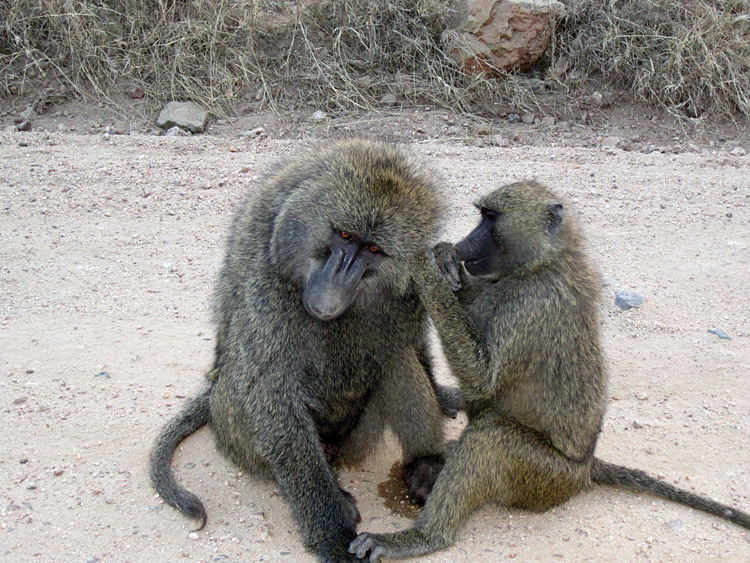 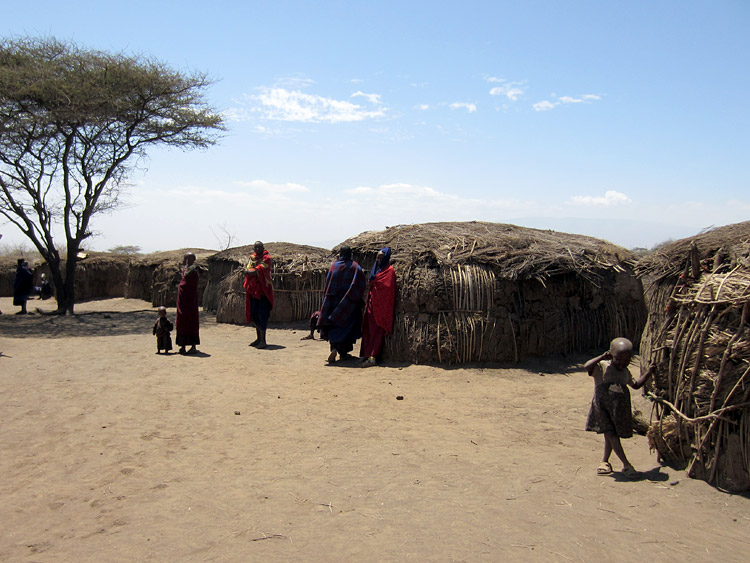 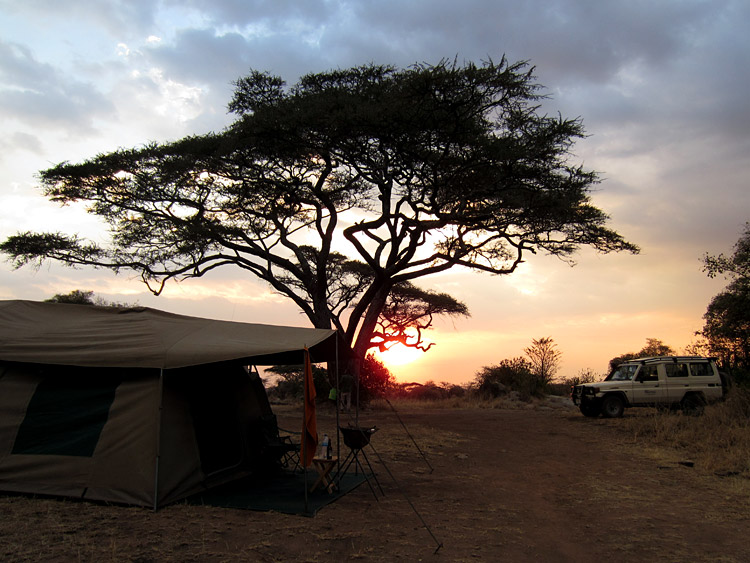 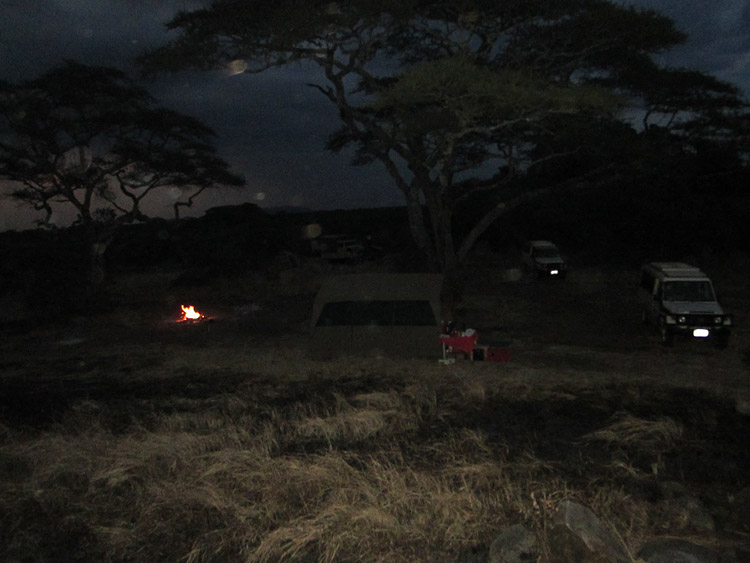