An Unfortunate Event:
Inciting Violence on the Lhotse Face

Introductory Comments:
For over 35 years I have climbed with the Sherpas in Nepal, and I know them to be very honorable. When the news broke last week about the fight at Camp 2, I thought there had to be more to the story than what I was reading in the media. Here, our longtime IMG guide, Mike Hamill, gives his view of what happened.

Trekking through the idyllic Khumbu Valley of Nepal beneath the mighty Himalaya, you feel at once in awe and at ease, as if you were in one of the most peaceful places on Earth. In fact you are: the Khumbu Valley, home to the Sherpa culture, has an amazingly low crime rate with virtually no violent crime. The Sherpa's focus on strong familial ties combined with Tibetan Buddhist beliefs and morality has created an atmosphere where locals, trekkers, and climbers can witness the beauty of the Himalaya without fear of being pick-pocketed or looking over their shoulder at night. I have been a team leader or member of seventeen 8,000m climbing expeditions and have spent months trekking through the Khumbu working and living with the Sherpa. In the four cumulative years spent among the Sherpa, I have never witnessed an act of violence. In fact, I have not even heard of one. This is one of the many reasons, along with their work ethic, sincerity, and good nature, that Sherpa have earned a reputation as a culture to praise and emulate, and have touched the hearts of so many.

Conflict on the Lhotse Face

Recently this serenity was interrupted in a well-publicized incident that occurred on the upper flanks of Mt. Everest. Conflict between two Western climbers and the Sherpa began early during a day of rope-fixing on the Lhotse Face, a prominent landmark of steep snow and ice ascending the popular Southern "normal" route to the summit. Sixteen Sherpa from various companies and villages throughout the Khumbu Valley prepared loads on the morning of April, 27th to anchor lines up the 4,000ft Face to protect climbers ascending the mountain. The two well-known Western climbers, Italian Simone Moro and Swiss Ueli Steck, also prepared to climb the Face that day, with another climber named Jon Griffith of the UK, but were asked by the Sirdar (leader) of the rope fixing effort to stay off the Face or climb elsewhere for the safety of both teams. This would ensure neither team would be climbing above the other, potentially dropping dangerous ice chunks and causing injury. "I asked them to stay off the face today," Phunuru Sherpa said. Kancha Sherpa corroborated that he too asked them to stay off the Face to avoid endangering the Sherpa team, but Simone waved him off. The two foreigners passed off this repeated request from a handful of Sherpas with the swipe of a hand and nod of the head stating clearly, "We will do as we please; we are going climbing on this route."

What would incite peaceful Sherpa to acts of violence high on the slopes of a sacred mountain? The events that transpired during the following few hours give us some clues. Simone and Ueli went climbing, initially trying to avoid the sherpa teams, but eventually traversing directly above two separate fixing teams high on the steep Lhotse Face, showering them with chunks of ice, hitting several and causing injury. An exchange of words ensued including the most foul Nepali words by both parties. "Ma-chik-nay Sherpa (F-ing Sherpa)," was voiced several times by Simone at the Sherpa. Ueli descended and grabbed a lead Sherpa by the jacket threatening a fight on steep terrain at nearly 24,000ft. Given the assault and dangerous behavior of the the two westerners directed at the Sherpa team, the Sherpa ceased fixing rope and descended to Camp 2 at 22,000ft. Shortly after, the Westerners descended as well, and the Sherpa confronted them.

Mountains are for everyone's enjoyment but on this day only, this single route had to be reserved for the rope-fixing team in order to get the route in place for a safe climbing season. Anchoring ropes on steep terrain means safe travel for 600 people preparing to climb the mountain including Simone and Ueli. This effort happens every year and is well known (and the ropes used) by both Simone and Ueli. If they choose to climb on a commercialized route they should be prepared to work with other teams for the safety of the entire mountain. Simone and Ueli were unwilling to cooperate. Despite this major hiccup and to their credit, the Sherpas resumed fixing rope after a day's rest without resentment.

Unfortunately, the situation escalated to the point of uncondonable physical violence. Several guides and Sherpa created a buffer between the now-submissive Europeans and the enraged Sherpa to quell their anger. The situation may have stopped at this point, but a spark was lit when a Westerner landed the first blow against a Sherpa. Violence ensued, and despite the best efforts of mediators, Simone and Ueli were injured.

Several veteran Sherpa expressed that Simone had a reputation as being difficult and ostentatious. A cultural disparity has long been apparent between western climbers and local Sherpa that most western climbers work hard to mitigate by showing respect and appreciation to their hosts. Many Sherpa feel this disparity is much more pronounced around Simone, and that he lacks a common respect for them. This arrogance combined with the dismissiveness, recklessness, and incendiary comments hurled at the Sherpa on the Lhotse Face incited the unfortunate events at Camp 2.

What should become of these regrettable acts? I hesitate to write about the incident because the best thing that can happen is for it to be forgotten as a childish event in Everest history. However, reports from the world outside Everest told me the Sherpa were being slandered and their perspective not represented. Sherpa are not the type of people to go to the media to resolve a dispute and they lack access. Sherpa culture is too kind, generous, and gracious to be scapegoated and passed off so ruthlessly by one-sided representation.

Several Sherpa will face punishment from their employers that will have severe consequences for them and their families. However, the instigators were Simone and Ueli. Will these two be held accountable for inciting violence and for their cultural arrogance, or will there be a double-standard? After this, it is hard to see these two as role-models despite the fact that they are among the most talented climbers in the world. Team work and a healthy respect for your peers are as equally important to the spirit of mountaineering as a technical ability to climb steep ice.

Mike Hamill is a climbing guide, author, and photographer from Seattle, Washington. He is currently at Mt. Everest base camp attempting his fifth summit and was on the mountain when the incident occurred. 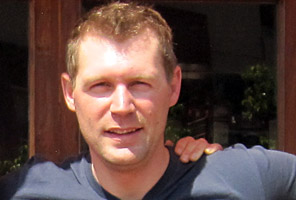 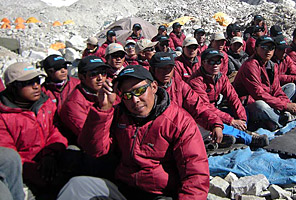 In the four cumulative years spent among the Sherpa, I have never witnessed an act of violence. In fact, I have not even heard of one...

~Mike Hamill
We will do as we please; we are going climbing on this route.

~Simone Moro and Ueli Steck
Anchoring ropes on steep terrain means safe travel for 600 people preparing to climb the mountain including Simone and Ueli. This effort happens every year and is well known (and the ropes used) by both Simone and Ueli...

~Mike Hamill
Sherpa are not the type of people to go to the media to resolve a dispute and they lack access. Sherpa culture is too kind, generous, and gracious to be scapegoated and passed off so ruthlessly by one-sided representation...

~Mike Hamill
Team work and a healthy respect for your peers are as equally important to the spirit of mountaineering as a technical ability to climb steep ice.