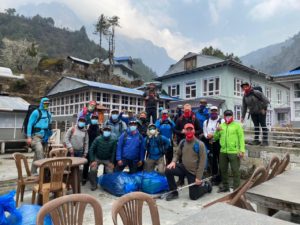 Team 1 ready to hit the trail in Phakding (Jonathan Schrock) 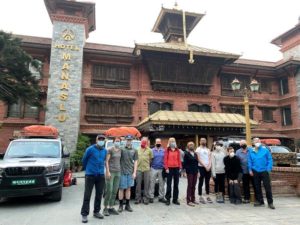 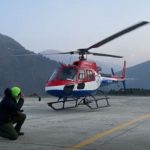 All Teams were on the move today in Nepal.  Up in Phaplu IMG Leader Jonathan Schrock checked in at dawn to let us know the weather looked good after a night of thunderstorms, and that the team was ready to head for the Khumbu Valley.  Sure enough our charter helicopters were soon flying and they were off to Phakding (normally the first overnight on the EBC trek, beyond Lukla).  After a nice breakfast in Phakding, the team loaded up and hit the trail for Namche.  They enjoyed beautiful weather for the entire day as they climbed above the lowland haze and had great mountain views.  At Monjo they entered Sagarmatha National Park, then crossed over the classic high bridges over the Dudh Kosi River before tackling the famous Namche Hill.  They pulled into Namche feeling good and will explore the largest village in the Khumbu Valley tomorrow. 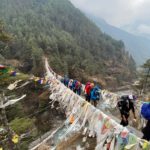 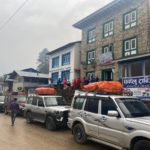 Back in Kathmandu, Ang Jangbu called to report that Team 2 was loading the SUV’s with gear and were ready to hit the road for Phaplu.  Air quality had improved slightly but the team decided to make the move to Phaplu where their chances will be better to catch heli flights up to the Khumbu Valley tomorrow morning.  The team will be up early tomorrow morning in Phaplu to check at the weather, and hopefully will soon be following Team 1 into the mountains.

We are so excited to be back on the trail in the Khumbu Valley! 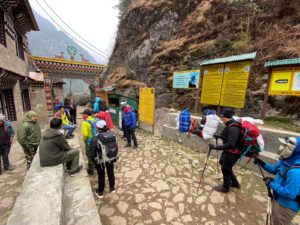