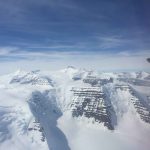 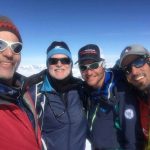 Eric, Anthony, Andy, and Matteo on the summit. (Eric Simonson) 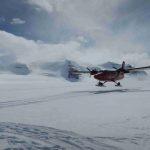 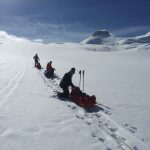 On the way to Camp 1. (Eric Simonson) 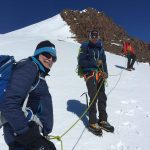 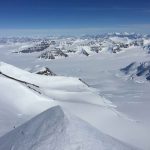 View from the summit looking down the glacier we ascended. (Eric Simonson)


It’s been said that mountaineering is a great excuse for traveling.  After 48 years of doing both, one of my favorite things to do remains going to a new place and climbing a mountain with some good friends!

The highest peak in the Arctic is Mt. Gunnbjørn (12,119ft.) in Greenland and this was the objective of our small team composed of myself, Anthony Nightingale, and IMG guide Andy Polloczek.  After spending four days exploring the area around Akureyri Iceland waiting for the weather to improve, we finally got the green light.  Our Twin Otter airplane with skis could only hold six people, because of the enormous fuel tank inside the cabin.  It was good that we had lots of gas, because it was 250 miles over the ocean to get to Greenland. We flew through cloud banks and climbed at one point to nearly 15000 feet to avoid icing conditions.  Once we got to Greenland, however, the weather improved, and we were able to descend through the clouds and around the gazillion peaks of the Watkins Mountains to our landing place on the glacier below Mt. Gunnbjørn.  There we met our Icelandic guide Matteo at Base Camp, whose team was waiting to fly out on our plane.  When his team departed, it was only the four of us and the polar bears. That’s right polar bears. We had a shotgun (with slugs) with us, but this time of year the bears are normally down near the coast hunting seals so we didn’t see any. I don’t think I have ever been in a place so remote…there was literally nobody within hundreds and hundreds of miles of us!

The climb was super fun!  We started by climbing up a gorgeous glacier for about four hours, pulling sleds McKinley style, to our first camp.  At 68 degrees north we had 24 hour daylight, but it got chilly at “night” when the sun dipped behind the ridges of Gunnbjørn.  The next morning was perfect weather, and we left the camp and continued to climb, first on snowshoes, then switching to crampons as the snow got harder.  From a saddle our route continued up a steepening ridge, where we belayed a couple of icy pitches along the way.  Then, we strode up the final summit ridge to the highest point in Greenland!  What a view—reminiscent of the summit of Mt. Vinson with ice as far as you can see, but with a whole lot more mountains.  You could look out to the west to the ice cap and all around us were so many mountains. It was one of those exquisite moments in time that you know you might never have again, and you are just trying to soak it all in.

We descended to our camp later that day, after an eleven hour round trip.  Then, we were up early the next morning for the last few hours of the descent back to the airstrip.  It was great to hear on the sat phone that the plane was inbound!  After a beautiful flight out, we got back to Akureyri in time to have a nice dinner, then caught an evening shuttle flight back to Reykjavik.  Then, the next day, we were all off on our separate ways, with a lot of great memories.  If this is your idea of fun, let us know and we’ll keep you posted if we do it again!