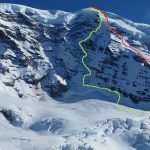 Thermogenisis Ski Descent. Up in red, down in green (Peter Dale) 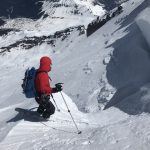 Above the upper bergschrund, looking across Willis Wall to Curtis Ridge (Peter Dale)

On May 23 IMG guides Aaron Mainer and Peter Dale climbed Liberty Ridge and then skied the Thermogenesis route, located on the right side of Willis Wall, next to Liberty Ridge.

This is an extreme ski descent of a route that has overhanging ice at the top of the route that would have fatal consequences if it released while anyone was on the route below.

Needless to say, this is a route for experts, who are willing to take a big risk even in perfect conditions.

My hat goes off to Peter and Aaron for this accomplishment!

On May 22-23 Aaron and I set out to try to climb Liberty Ridge, and take a look at skiing Thermogenesis. From what we have heard Thermogenesis gets climbed on occasion, but hasn’t been skied yet. (to my knowledge, two parties of two have climbed it to date, GD).  It is an aesthetic line, though has some obvious huge objective hazard hanging over it, making it a true roll of the dice on dodging stuff coming off the Willis Wall. Our theory was we might be able to ski the sides/walls of the chute and avoid some of the objective hazard….

We left the White River Campground on Monday afternoon and had a pleasant skin and ski to Curtis Ridge via St. Elmo’s Pass….where we camped for a very warm evening on a patch of bare rock next to the typical entrance onto the Carbon Glacier.

Tuesday morning had us moving out of camp just before 5:30AM behind one other group of three from the Jackson Hole area who were also planning on climbing and skiing Liberty Ridge. We owe them a few beers for their trail breaking efforts on the lower part of Liberty Ridge, thanks guys! After skinning up the Carbon we found an easy bergschrund crossing at 9200 on the west side of Liberty Ridge. Here we were passed by a group of three rando race guys doing a speed climb of Liberty Ridge and ski descent of the Emmons. They were really moving on their light gear and quickly overtook the Jackson group of three ahead of us as well. We also owe them beers for breaking trail up the upper half of Liberty Ridge….. In general conditions seem very good on the route right now. We made it to the top of Liberty Cap in about 6 hours, and started skiing down around noon.

After skiing a little over a thousand feet of chalky pow toward the top of the black pyramid we veered skier’s right and entered the Thermogenesis route. As we changed to a more easterly aspect the snow transitioned pretty quickly from chalky pow to slightly over-ripe corn which was also fantastic skiing yet didn’t want to entrain much with each turn. Here we entered the part of the run with the severe overhead hazard and we leap-frogged pretty quick down the route…. We bounced from the skier’s left to right sides back and forth down the route avoiding minor cliff bands here and there that we had spotted the afternoon before from camp. Upon reaching the bergschrund above the Carbon at the base of the route the bridge we thought we had spotted the day before turned out to be a no-go, so we quickly traversed skiers left out of the debris fan of Thermogenesis and found a rock outcropping to hide out beneath and build an anchor to rappel over the bergschrund. We did a 15m or so rappel and then zig-zagged between crevasses on the upper Carbon glacier while skiing back to our up track, and then took it back to camp. After snacking and admiring our tracks we packed up our overnight gear and slogged across Curtis Ridge and the Winthrop Glacier back to St Elmo’s, from which we enjoyed a sticky run through Glacier Basin and down the trail. 30 or so minutes of walking had us back to the car a bit before 6PM to enjoy some cold beers.