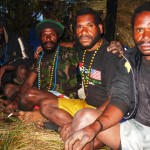 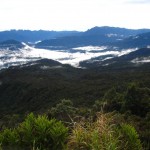 Dropping off the Plateau back into the forest.

Dan Zokaites reports by sat phone that the team hiked yesterday from Base Camp back over new Zealand Pass to the site of Camp 5 (sometimes referred to as Nasidoma…this is also near the place on the route where the trail from Illaga joins in).  They were joined by about a dozen of the local Sugapa guys who had stayed at Base Camp to wait for them while climbing.  Then, today, they all hiked to Camp 4, re-crossing a good chunk of the Plateau.  The goal for tomorrow is Camp 2.5…they will be back in the forest.  Everyone is getting pretty tired, but they are grinding it out.  So far, so good!