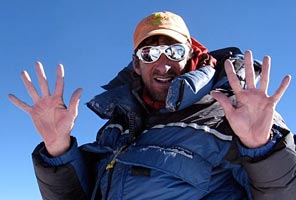 Pasang Tshering, Hahn's contact person in Katmandu, said Hahn and his teammates were all safe and in good health and were slowly making their way down to base camp on Wednesday. They are expected back from the mountain early next week.

The record for largest number of climbs of the world's highest mountain is held by Appa, a Sherpa guide who earlier this month scaled the peak for the 18th time.

Appa's closest rival is fellow Sherpa guide Chhewang Nima, who has made 15 trips to the Everest summit.

There are at least seven other Sherpas who have climbed Everest more than 10 times.

Nepal temporarily banned climbing on the mountain in early May to prevent any protests against China while climbers carried the Beijing Olympic torch to the top. The team reached the summit on May 8, and Nepal lifted the ban a day later. Everest straddles the Tibet-Nepal border.