IMG guide Phunuru Sherpa reports from Kilimanjaro that our custom Kili team have begun their climb.  Yesterday they drove from Moshi up through the coffee and tea plantations to the Machame Gate (about 6000 ft) where they checked in with the Park Service and showed their permits. 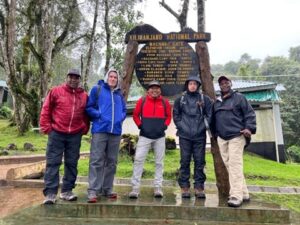 Kili climbers at the Machame Gate at about 6,000 ft (Phunuru Sherpa)

Then, with our crew of local Chagga guides and porters, they headed up through the forest to the Machame Camp at about 9300 feet.  The Machame Camp is located at the top of the forest zone, and tomorrow they will leave the trees behind and ascend into the moorland, heading for the Shira Camp. 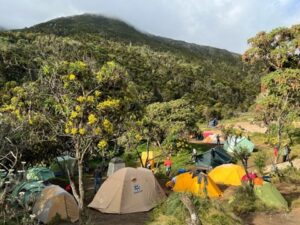 So far Phunuru says that everyone is doing well, and the weather is decent.  They had a little rain but it cleared up later.  All’s well on Kilimanjaro!