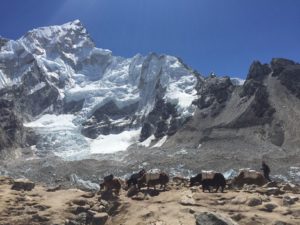 Yaks on the way to EBC with Nuptse behind (Eric Simonson) 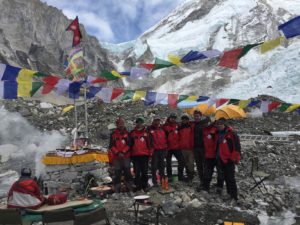 The Icefall Doctors at their Base Camp puja (Eric Simonson)

We received word from Nepal that the Team of SPCC “Icefall Doctors” have now left Kathmandu and will be heading to Everest Base Camp over the next week. The 8 Sherpa on the team will be in charge of putting in the route to Camp 2, and maintaining it throughout the 2020 Spring Climbing Season.

Also, Ang Jangbu reports that the HRA have confirmed their medical doctors for the upcoming season, who will be staffing the HRA clinics at Pheriche,  and also at the “Everest ER” at Everest Base Camp. The HRA team will also be moving uphill in the coming days. We’ll look forward to seeing our friends again at the Himalayan Rescue Association (HRA) and Everest ER!

Finally, our big food shipment is inbound to Kathmandu as we speak. Our staff will  break it down and pack it into yak loads and send it to Khumbu for the trip uphill to Everest Base Camp.

We are getting closer to the departure date!