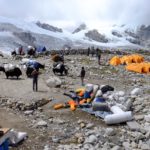 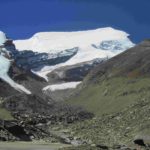 Mingma Dorje called from base camp on Putha Hiunchuli to let us know that the weather is clearing up and the climbers are all doing well.  There are only a couple other teams arriving at base camp.  The team will continue to acclimatize around base camp and do some training for a couple days before having their Puja and preparing for the first rotation up the mountain.

In Tibet, Phunuru reported a very cold morning for departure.  The team got packed up with about 2 inches of snow on the ground at ABC.  After breakfast, the team started trekking down to Intermediate camp where they were be picked up by the vehicles.  The team is now in Tingri for the night and will head for Kyirong in the morning.

All is well in Nepal and Tibet!