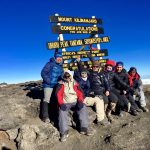 Phunuru and the Team on the summit of Kilimanjaro (Phunuru Sherpa) 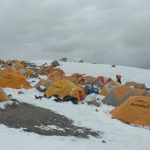 Summit of Vinson on a previous expedition (Greg Vernovage)

We’ve got updates from IMG expeditions on Kilimanjaro, Vinson and Aconcagua.  Let’s start with Kili…

As reported earlier, everyone summited this morning in excellent conditions and returned to high camp without issue.  The good news continued with an afternoon update saying that everyone is down at Mweka Camp, in the lap of luxury.  A nice evening, good sleep and a few hours walk and this climb is in the books.  It’s safari time!

Way down South, Austin Shannon reports they got onto the Ice about 12 hours ahead of schedule.  They had some great meals and a good sleep at Union Glacier, which is where the big plane, the IL76 lands.  Hope was to fly the 1 hour over to Vinson base camp today.  All’s good WAY south.

Jonathan Schrock reported in from Aconcagua.  Wind is the issue.  Skies are clear, it’s cold but the issue right now is wind.  That said, the team’s in the best place possible.  They’ve carried to high camp but aren’t AT high camp.  Much easier to deal with the winds at C2 rather than at C3.  They’ll use every day possible with the hopes they can anticipate any breaks in the wind and move into position for their shot.  The team receives lots of forecasts, but they’re only forecasts, no guarantees.  All healthy, strong and where they should be.  Mother nature needs to cooperate, just a little.  We don’t need perfect but we do need reasonable.