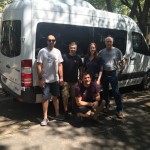 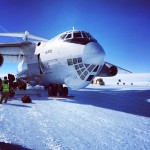 The IL-76 on the ice in Antarctica. (Austin Shannon)

News from the South—-Austin and team got off the Ice without issue.  The Twin Otter (aircraft) was waiting for them when they arrived at Vinson base camp and whisked them right to the Union Glacier.  It was only a couple of hours before the IL 76 arrived and got them to Punta Arenas about midnight, that same day.  Amazing.  One short night at the hotel in Punta, a final lunch together and team members were heading off in different directions.  All’s well that ends well with this Vinson Massif expedition.  That bring our Vinson season to a close for this year.  3 expeditions and 3 expeditions reached the summit, all without a scratch.  Dates for next year’s expeditions will be posted quite soon.  Make your plans now as we’ve sold out our trips for the last couple of years and had to turn climbers away.  See you on the Ice next season.

In Ecuador, Luke said good-bye to a couple of our members who were there to climb Cayambe and Antisana.  Our Chimborazo team is heading now with Luke and Romulo to make an attempt on Ecuador’s tallest peak.  It’s a more demanding climb, but with success on Cayambe and Antisana, they’re feeling hopeful.

Another expedition has started on Aconcagua.  Jonathan Schrock, Martin Lucero and team are heading to Penitentes today.  Final packing occurs there and the approach starts tomorrow morning.  Here’s hoping for favorable weather.  The mountain has not made things easy so far this season.