Rapelling the First Step on the rescue descent 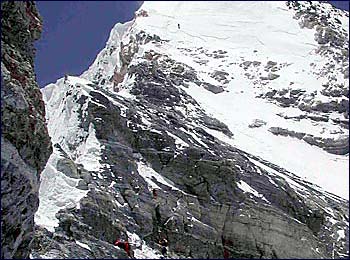 At their 100th anniversary meeting at Snowbird in February 2002, the American Alpine Club has awarded the David A. Sowles Memorial Award to Tap Richards, Jason Tanguay, Dave Hahn, Andy Politz, Lobsang Temba Sherpa and Phurba Tashi Sherpa for distinguishing themselves, with unselfish devotion at personal risk or sacrifice of a major objective, in going to the assistance of fellow climbers imperiled in the mountains.

This was for their rescue of five climbers high on the North Ridge of Everest in 2001.